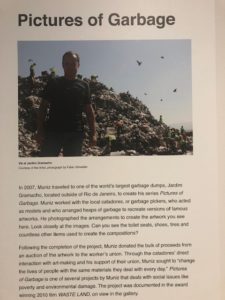 After learning that the Beaux Arts Fair was in town this weekend, I drove over to our Figge Art Gallery to check out the treasures. Over the years, I’ve bought many pieces of jewelry, pottery, and some metal or wood work at the Beaux Arts Fair. This year was no different.

I walked up the 22 steps to the landing (right next to the Figge’s entrance) and admission was FREE (normally $6 to $10, depending on age), so I first toured the exhibit on the 3rd floor, which was “Vik Muniz: Hand Remade.” Artist Vik Muniz is known for manipulating familiar materials by hand, like chocolate sauce, diamonds or pieces of garbage, and re-composing iconic images from art history or pop culture.  The creations are temporary, while the photographs he takes of his arrangements constitute the final artwork. 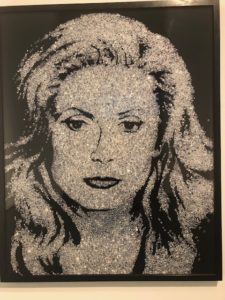 Catherine DeNeuve, at the Davenport Art Gallery, by Vik Munoz.

This exhibit featured the “Pictures of Garbage” series, one of Muniz’s most recognized, as well as recent work, from the Handmade” series. He worked with materials such as paper, rope and fabric. As you entered, you were presented with a large portrait of French actress Catherine Deneuve, which was formed by laying out crystals on a black surface. It was more impressive as you approached up close and realized that he had laid out all of the small zircon-like pieces to form her image. As you enter the final room, you see this picture: 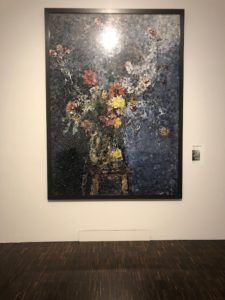 Next, you enter the room with the portraits that Brazilian Muniz made by going out to the garbage dump near his Sao Paulo home and photographing garbage. If you look closely at the image below, you will see a figure within the brown garbage. These portraits of garbage are among his most well-known. This picture was on loan from a New York City gallery. 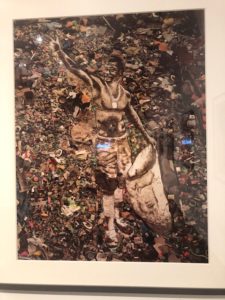 From “Pictures of Garbage” series.

There was a “do it yourself” exhibit of small paper plates on the floor. I would have moved them around to form a Peace symbol, but I feared I would never be able to get back up off the floor, if I did, so what you see (below, left) is what you get. 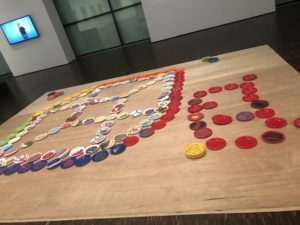 Now it was time to move outside and visit the locals. Most were from places like North Liberty, Galena, the Amanas. 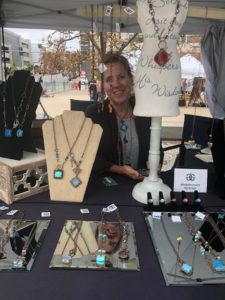 Julie Spangler of Galena Glass Jewelry at work at the Beaux Arts Fair on 9/8/19.

First, I got a ring and earrings from Julie Spangler of Galena, Illinois. (GalenaGlassJewelry.com). Julie’s pieces were modestly priced (mostly $22) and the rings were adjustable. She was selling lockets that have small pieces of cloth inside, which you are instructed to drench with your favorite perfume. I didn’t buy one, at first, but, later, I went back and bought one of the last three. One of the more unusual ways to freshen jewelry by combining the olfactory with the visual.

Next, I bought a dragonfly from A.J’s Copper Garden and Metal Art Gallery (proudly made in the Amana Colonies). I think the name of the young man who assisted me was Sam. He told me he grew up near Ashton Kutcher’s original home (Williamsburg), did not attend college in Iowa City (as one would assume), and had been making a living with his art ever since graduating from high school. He travels to the northern suburbs of Chicago a lot. 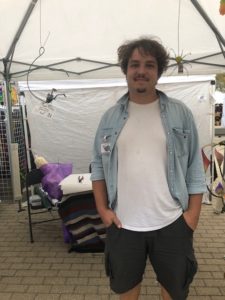 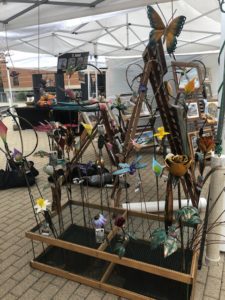 My final purchase was a retooled old watch that had been made into both a necklace and earrings. When I mentioned these purchases to the young man from A.J.’s Copper Garden & Metal Art Gallery of Homestead, Iowa (3146 Hwy 6 Tail, Homestead, 3.3 miles south of Amana on Hwy 151), pictured above, he pulled out a money clip that looked just like my new watch pendant and noted that he had been seeing these quite frequently in his movement around the art fair circuit.

Last Day at Sea and Last Day of August