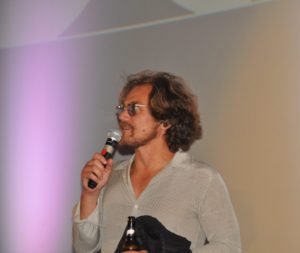 Chicago actor Michael Shannon greets the crowd at the AMC Theater in Chicago at the premiere of “Knives Out.” (Photo by Connie Wilson)

The Chicago premier of “Knives Out” took place in Chicago at the AMC Theater and Writer/Director Rian Johnson (“The Last Jedi”) attended, along with cast member Michael Shannon, who has a longstanding connection to Chicago. The film was well-received in its Wednesday premiere and a Q&A was held following the film. 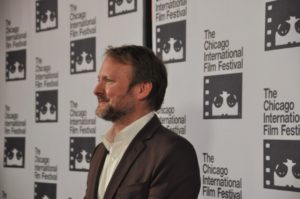 Director Rian Johnson at the Chicago premiere of “Knives Out.” (Photo by Connie Wilson).

Award and screened his second directorial effort, “Chicuarotes.” The crowd was very enthusiastic about Bernal’s attendance at the festival and presented him with a Mexican flag, while one entire row wore tee shirts that bore the name of his new film. (His first film was also screened at the festival some years ago, and he shared that the first award he ever won was given him by the Chicago International Film Festival.) 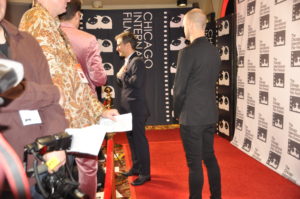 Gael Garcia Bernal on the Red Carpet in Chicago on October 26th. (Photo by Connie Wilson).

“The Aeronauts” Is A Gorgeous Cinematic Adventure