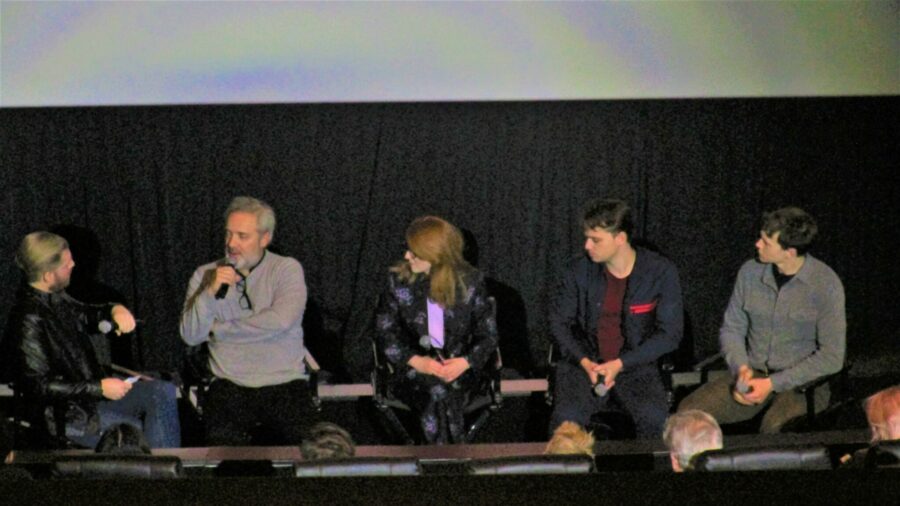 Sam Mendes, director of such classic films as “American Beauty,” “Road to Perdition.” “Skyfall” (one-time husband of actress Kate Winslet—7 years, ending in 2010) visited Chicago with the two leads from “1917.” His co-writer on the film, Krysty Wilson-Caerns and stars George McKay and Dean-Charles Chapman were also in attendance.

“1917, plotwise, is a bit like “Saving Private Ryan.” Two young British soldiers must go behind enemy lines to reach Benedict Cumberbatch, the Commander of 1600 men poised to attack at dawn. New intelligence shows that they will be walking into a trap the morning of April 6, 1917. 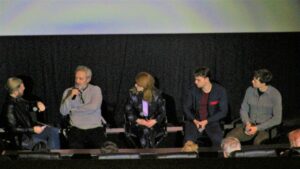 Mendes is one of only six people to win a Best Director Oscar for his first film, 1999’s “American Beauty.” He has spent most of his career directing theater productions and told the audience in Chicago, following the showing of his Golden Globe-nominated film “1917” that, because of his heavy-duty theater background, he is used to “judging the audience.”

“I couldn’t take out anything.  It is not ‘right’ or ‘wrong.’ It’s an instinct. To me, it’s part of my theater judging of ‘Yeah, that’s what I want.’” He added, “I was encouraging them (the actors) to live it as much as act it.”

In the Q&A following the showing of the film Mendes told the audience that the film was an homage to his grandfather, who, at the age of seventeen, served in World War I as a messenger. “It’s not about my grandfather because of my grandfather. It was the spirit that I really remembered from his stories. The two leads are two of two million, but representative of those who fought in the war.  The sense of a collection of individuals was very special…It’s 110 minutes in someone else’s life.” 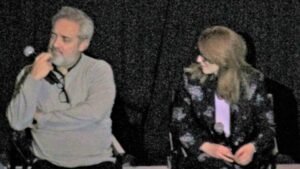 Director of “1917” Sam Mendes (“American Beauty,” “Skyfall,” “Road to Perdition”) and screenwriter Krysty Wilson-Caerns in Chicago at the AMC Theater on December 10, 2019.

The actors were rehearsed for a period of six months. The sets were built to support scenes that sometimes ran, uninterruptedly, for eight or nine minutes. The cinematography is gorgeous. In many cases, the scene had to be achieved in one take. Reciting those principles that good writers have often cited (Show, don’t tell.) Mendes said, “For me, exposition is the death of storytelling,”

Mendes pointed out that the audience is not told the lead’s name or about Lance Corporal Schofield’s family until the end of the film. “You need a good actor is what you need,” said Mendes. He added, “You want the happy accidents that occur.” One such “happy accident” was a scene where George McKay is knocked over (twice) by cast members whom Mendes described as “over-eager extras.” “The crew and I, 92 people watching, were muttering, ‘Get up, George. Get up, George.”

Of the journey of the two soldiers behind enemy lines Mendes said, “The ways the characters react to the space is not unlike the way the audience reacts.” George’s character of Lance Corporal Schofield, the more seasoned soldier of the two, has seen more combat, and tries not to look at the corpses and dead horses along the way, but Dean-Charles’ character, Blake, a novice, (like the audience), looks at everything. “Blake looks at it. He sees a generation gone.” 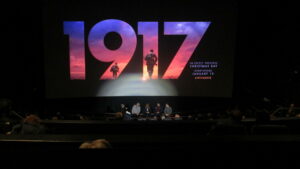 This European attitude towards the ravages of both World Wars is distinctly European and British.  The wars were fought on the continent; the blitzkrieg targeted England. There is, as Mendes said, “a sense of time passing and bodies piling up.”

When “Road to Perdition” was mentioned (another superb Mendes film, which was shot in Chicago), Mendes—who is listed as having only 10 director credits on IMDB (but many producing and TV credits), said, “I loved being here, absolutely loved it.” He went on to relate an anecdote that occurred during shooting in Geneva, Illinois.

“I was walking down the street in Geneva with Tom Hanks on one side of me and Paul Newman on the other. A local woman was coming toward us, walking down the road carrying a Starbucks coffee. As she got closer and could make out the famous faces coming towards her, she passed out. Imagine when she woke up and who was looking her in the eyes but Paul Newman with those blue eyes saying, ‘How you doin’? You okay?”

“1917,” which is garnering awards nominations in many “best of” categories, opens in select theaters on Christmas Day and will be playing wide on January 19th.