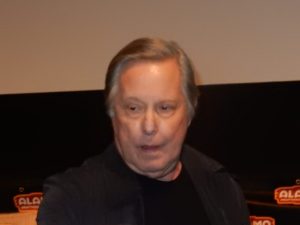 Acclaimed Director William Friedkin came to the South Lamar Alamo Drafthouse in Austin, Texas, on Saturday, May 12th, at 7 p.m. with his 70 minute documentary “The Devil & Father Amorth.” It screened to a packed house that came as much for the Q&A that followed as for the dry examination of the Vatican’s exorcist, whom Friedkin described as “the most spiritual man I ever met.”

The film, shot in 2016, was the first time an actual exorcism was allowed to be filmed, but the permission came with restrictions: only Friedkin could be present. No cameramen. No lights. And little action, as it turned out, except for the exorcism of a 31-year-old Italian architect named Gabriela Amorth, who had been unsuccessfully treated 8 times previously.  The actual exorcism, on May 1, 2016, was filmed by Friedkin using a small handheld camera and what he termed a GoPro, which, he said, is often used with drones. He certainly has experience in actually shooting scenes himself, as he proved during the shooting of “The French Connection” when he wrapped himself in a mattress in the back seat of a car driven at 90 mph and shot on the fly through the streets of New York City, (with no formal permissions to do so).

Amorth was 91 at the time of the filming and Friedkin said he did not set out to film an exorcism. “I had no intention of making this film. I was in Lucca, the birthplace and home of Puccini, getting the Puccini prize for filming his operas. I was just there for 8 days in Lucca and I learned that the Leaning Tower of Pisa was only 30 miles away. From there, you could get a direct flight to the Rome airport, a one-hour flight.” Friedkin said he sent an e-mail asking if it would be possible to meet with Father Amorth, the world’s most famous exorcist, and he received the tentative yes, with conditions. Graydon Carter of “Vanity Fair” magazine (the recently retired publisher) urged Friedkin to go to Rome and interview Amorth and write an article for the magazine. 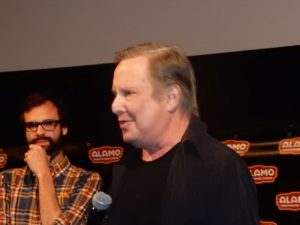 Friedkin at the South Lamar Alamo Drafthouse on Saturday, May 12th, with “The Devil and Father Amorth.” (Photo by Connie Wilson)

Friedkin did, in fact, write a 6,500 word article for “Vanity Fair” and shot the film we saw this night, which was far from the fiction of “The Exorcist.” He stressed that the Vatican has a very “hush hush” policy about exorcisms, so there really is no way to find out the truth of whether they work or not. But, after observing the 9th such attempt to rid the pretty architect of her demon, this film, dedicated to William Peter Blatty, who died in 2017, was the result. Asked if he thought Blatty would like the film, Friedkin said, “I think he would love it, which is why I dedicated it to him,” but he also noted that Blatty thought Amorth was a charlatan.

With 62 million people in Italy, 500,000 of whom ask for an exorcism to be performed annually, Blatty is not as quick to throw out the idea of an exorcism being ineffectual. Far from being an agnostic, as Wikipedia says he once was, Friedkin professed to believe in Jesus and said, “Who is anybody to say there’s no God?  We don’t know.  There are so many myths in the Bible, but there are billions of people who believed Jesus Christ was the son of God, because emotion trumps logic every time.” Friedkin went on to cite non-believers like Christopher Hitchins, who spoke out against the canonization of Mother Theresa, but, asked if he would banish religion and replace it with rational thinking if he could, he repeated,“Emotion trumps reason every time.  It’s why you have religion.  You cannot banish religion.”

During the Q&A, in addition to sharing that Father Amorth was an avid critic of the Vatican, but never experienced blowback from the Holy See because he was so popular, he was asked about the state of filmmaking today.

Said Friedkin, “They’re not for me,” of today’s movies, calling them spandex movies.  “There’s never any real danger or real suspense. It’s opium for the eyes.  There’s very little being done that I like.” He did, however, cite “A Quiet Place” as one of the few movies he’s seen that he liked very much. 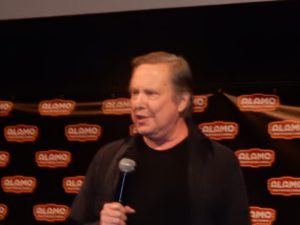 William Friedkin at the Alamo Drafthouse, Austin, Texas,on May 12, 2018. (Photo by Connie Wilson)

When asked if anything weird or supernatural occurred during the filming of the 1972 classic “The Exorcist” Friedkin recalled how he received a phone call at about 4 a.m. from his D.P. (production manager) saying, “Don’t come to work tomorrow. The set burned to the ground about 2 hours ago.” Friedkin said that insurance did pay for the catastrophe and that some theorized that a pigeon (there were birds flying about in the area and on the set) may have flown into a light box, but, he noted, “there was a watchman sitting outside” and he thought the entire set burning down was unusual.  “I did not make the film as a doubting Thomas,” he said.  “I made the film as a believer.”

The chatty Friedkin (whom the interviewer/moderator referred to as “Billy,” which struck me as odd, since the man is 82) probably would have stayed and talked to us for hours, or so it seemed, but the staff needed to clear the hall for the influx of theater-goers coming to see the original “The Exorcist” on the big screen.

Meeting William Friedkin in person (and giving him a copy of “It Came from the 70s: From The Godfather to Apocalypse Now“ was a real thrill for me. The man has made 15 films in 53 years and given us such classics as “The French Connection” (he was the youngest director to win Best Director at age 32 and the film also won as Best Picture), “The Exorcist,” “Sorcerer” and many, many more. I hope he continues to thrive in life.

The film ended with film of the funeral of the subject of the film, 92-year-old Father Amorth, who caught pneumonia and died very shortly after this documentary was made. The testimony of various psychiatrists and psychologists and the news that the very condition of being possessed is now termed ‘disassociative personality disorder- demonic possession’ was mentioned several times. Said Friedkin, “After I filmed it, it occurred to me that I should take it to 2 or 3 of the best brain surgeons in the world and let them debunk it.  The psychiatrists now recognize demonic possession, although they’ve removed a few disorders from the books, like homosexuality and narcissism.” He noted, with a nod to the current political climate, “I guess they feel that everybody from the top on down in this country has that.”

One thing that came out of the evening was that Blatty’s book was sheer fiction, because Blatty couldn’t find any way to break the church’s policy on letting anyone witness an exorcism and the only two reported ones in this country occurred in the 1922 in Early, Iowa, and in 1949 in College City, Maryland, which is the one that “The Exorcist” was based on. Said Friedkin, “The church does not really want people to know that there are people out there who have gone through it (an exorcism) and it has not been successful.” He described his own emotional experience while witnessing Gabriela’s exorcism as “terrifying” saying, “The fits come and go, like epileptic fits.” He also shared the fact that John Paul II was an exorcist in Poland before he became Pope and passed on 2 cases to Father Anorth when he ascended to the top position in the church hierarchy. And, said Friedkin, his life was threatened for the only time in his 82 years when Gabriela’s boyfriend demanded all the film he had shot of the exorcism back and Friedkin refused, causing her boyfriend, a member of the sinister Pyramid Cult, to threaten to kill him and all of his family. (Friedkin did not return the film.)

As a parting thought, Friedkin said, ‘There is a far deeper dimension to the Universe.  If there are demons there must be angels.”