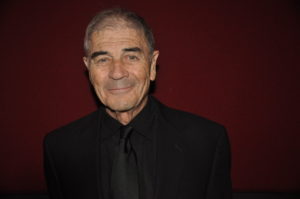 We watched “El Camino: The Breaking Bad Movie” last night and liked it very much

.There are numerous flashbacks that provide some “Walt” for those who have to have Walt with their Jessie.

Since the original series had been off the air for 6 years, I confess to being hazy on some of the finer TV plot points. For example, I did remember that Jessie was kept in a cage and tortured and forced to make crystal meth, but the contraption used to give him mobility was totally forgotten by me, until it re-emerges in this film.

The “shoot-out at the O.K. Corral” part is quite good. (See it to find out what I mean).

Jessie’s desperate attempt to get money to finance his “disappearing” act was well done, with a run-in with “police” that is very creative. This part involves Robert Forster, who helped Walt hide out in the TV series.

Yesterday Robert Forster, 78, known as “the Disappearer” in the original TV series and the long-ago star of “Medium Cool” back in the sixties (one of the few—-perhaps only—-examples of cinema verite in the U.S.) unexpectedly died of brain cancer. I met Forster in October of 2018 as he made the film festival rounds on behalf of “What They Had,” a very good film with Michael Shannon, Vera Farmigia and Blythe Danner co-starring about an elderly couple coping with the wife’s encroaching Alzheimer’s disease.

Forster was perfect in the part of her devoted elderly husband, but when I saw him standing in the aisle as I walked to my seat (he was leaning against the wall at the time, in preparation for the post showing Q&A) I had to go over and introduce myself and tell him how much I admired his work in “Medium Cool” and many other projects. He was genuinely warm and friendly, and we chatted briefly for a few moments before I took my seat. Then, he talked about his career, both in an interview in the Chicago “Tribune” but also onstage, and, once again, cemented my admiration.

This is Forster’s final film role. I was struck, when he first came onscreen, by how much he had aged in just one year, as it was October of 2018 when I met him in person. It is one year later, I am about to leave for the October film festival again, but Robert looked like 5 years had passed. I assumed it was make-up. And then I heard that he had died, of brain cancer.

I found the arc that Jessie traverses in this film believable and well-acted and another reason it rang a particularly intense bell with me, besides the information in the paragraph above, is that we just returned from a tour of Alaska and Alaska has an important role in the plot.

I definitely recommend the film for fans of “Breaking Bad.”

“Joker” May Bring Joaquin an Oscar