In Chapter Five Trump wants to know, “Where the hell  is the money?”

He harasses fund-raiser Chris Christie regarding his efforts to raise funds for the campaign. Bannon tells Jared Kushner that Donald Trump needs to pony up $50 million for the campaign, because a candidate is not constrained by limits as other donors are. Kushner tells Bannon that DJT is not going to contribute that much and, in fact, after several back-and-forth negotiations, Trump puts in $10 million, instead. 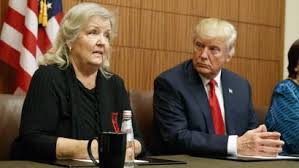 The debate is held, and Bannon plans for all of Bill Clinton’s female accusers to be right down front so that, whenever Trump’s Access Hollywood tape is brought up, DJT can say, “My offense was just words. Bill Clinton’s offenses were deeds.” The women make quite a rogue’s gallery of former accusers, including Juanita Broaddrick, whom Bill Clinton paid $850,000; Kathleen Willey who alleged that Clinton had sexually assaulted her in the White House; and Kathy Shelton, who accused Hillary herself of smearing her when she was defending client Shelton. While the debate organizers would not allow the 4 women to sit at the table with Trump or in the VIP box, in a scorched earth kill shot move, the women came in late and sat in the front row.

Woodward is in KEY2ACT in Fort Worth, Texas, and is quite surprised to see 200 hands go up when he asks who, in the audience, is going to vote for Trump. He was speaking on “The Age of the American Presidency: What Will 2016 Bring?”

Trump made a last ditch trip to North Carolina where Congressman Mark Meadows who represented the 11th District reassured him that North Carolina would go for Trump.  (“The evangelicals are out. They’re ringing doorbells. I’m telling you, you do not need to come back to North Carolina. We’ve got this.”)

Pence made 23 appearances in Pennsylvania; 25 in Ohio; 22 in North Carolina; 15 in Iowa; 13 in Florida; 8 in Michigan; and 7 in Wisconsin. Bannon was surprised that HRC was not utilizing Obama, who had won Iowa in 2008 by 6 to 10 points, and that she never visited Wisconsin in the general election. Two days before the election when Woodward appeared on “Fox News Sunday” with Chris Wallace Woodward commented that those polled might be lying to the pollsters. Trump made a 5-state swing including North Carolina right before the election, but he also said, “If we don’t win, I will consider this the single greatest waste of time, energy and money.”

Meanwhile, Clinton had a big rally at Philadelphia’s Independence Hall where tens of thousands gathered and Obama whispered to her, “You’ve got this. I’m so proud.” (Well, maybe not.) The polls still showed HRC ahead, with a tie in Ohio and Iowa and Trump down 9 in Pennsylvania and down 7 in North Carolina.

Trump had no transition tem and was totally unprepared to take over the White House in 10 weeks at noon and staff it with 4,000 people. Bannon called the group “the island of misfit toys.” Priebus and Bannon agreed to call Bannon “chief strategist” and Priebus White House chief of staff.