Four of the Best Casino Scenes in James Bond Films

If there’s one man who has single-handedly popularized casinos, it’s James Bond. First introduced in the novels by Ian Fleming, Bond has quite the penchant for high-stakes action. In the film franchise, we see 007 take on pretty much every casino game under the sun. Baccarat, Roulette, Poker, and even Sic Bo – he’s played them all. There’s even a Roulette strategy named after Bond, and actor Sean Connery had a real-life casino win of his own at the wheel. In homage to this, let’s take a look back at some of the greatest scenes in the film franchise. 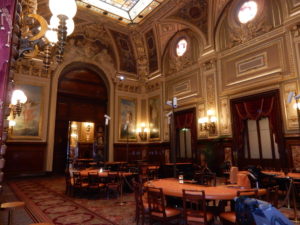 What better place to start than with the winner of the
Best Movie Poker Scene poll? Based on the first novel in the Ian Fleming series, from 1953, the film goes back to the beginning, with Bond embarking on his career as a secret agent and earning his license to kill. He’s put on an assignment to bankrupt terrorist financier Le Chiffre.

A large portion of the film takes place in the casino, as 007 enters a tense high-stakes game of Texas Hold’em. It isn’t smooth sailing for our hero, who loses his stake, but CIA agent Felix Leiter stakes him. Midway through, Bond is poisoned and leaves the table, but later returns. All’s well that ends well, and the final hand scene is iconic. The game is down to the last four players. With $120 million in the pot, Le Chiffre believes he’s the winner with a Full House. He is until the final player Bond reveals a Straight Flush to come up trumps.

From one of the most recent films to the first now – and an iconic scene. The game of choice for Bond, this time played by Sean Connery, is Baccarat. The film opens with 007 sitting in a casino, playing Chemin-de-Fer. While he’s at the table, he notices a woman observing his game. Bond gazes back at her, before introducing himself using the famous lines: “Bond… James Bond”. The focus may not have been solely on the casino, but the scene alone defined the character and made the role difficult for other actors to emulate.

The seventh film of the franchise is the last time we see Connery play Bond. Throughout the film series, we see the secret agent dispatch of his nemeses in many ways. In the opening credits, 007 eliminates a villain by jamming his head against the Roulette wheel. Okay, so not the most glamorous portrayals of a casino, but a memorable title sequence. You can channel your inner-007 with the best Roulette games online, too. Bond goes on to play Craps at the Whyte House, the casino owned by Willard Whyte – and it’s the only film where he plays Craps. Jill St. John appeared in the film, but it’s here that he meets Bond girl, Plenty O’Toole (Lana Wood, sister of Natalie), and of course, in true Bond style, he wins the jackpot. 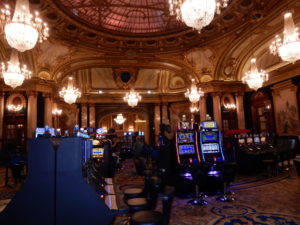 The Macau casino, which featured in one of the most recent films of the franchise isn’t actually in China – it was filmed at Pinewood Studios in London. The fictional casino was based on a real floating establishment, and is still impressive. The Floating Dragon casino features 300 floating lanterns, giant dragon motifs, and beautiful ornate décor. We don’t see much of Bond playing Sic Bo during the scene, as he soon retreats to the bar. But we’ve included it because the casino itself is pretty spectacular.

James Bond and casinos go hand-in-hand. While we’ve listed our four favorite scenes from the movies, there’s plenty more to watch and dissect. Leave a comment  if we’ve missed your favorite.