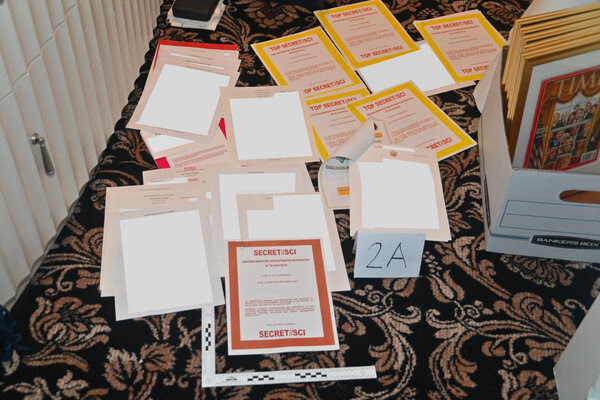 The search at Mar-a-Lago on Aug. 8 found twice as many classified documents as Trump’s lawyers had turned over voluntarily, despite promising they had returned everything. This was also despite two attorneys (one named Evan Corcoran—hope he’s no relative) signing off and telling the FBI that those they had initially taken were the extent of it, when they were not.

The documents had been seen by members of the club, some of whom ratted The Donald out about his lax handling of the sensitive documents, marked Top Secret, Secret and Confidential. Regardless of how “sensitive” the documents were, they should not have been removed from the White House. It is not true that “they all do it” and that “Obama took some, too.” All previous presidents followed elaborate protocols for when and where they could even look at the documents, but Trump apparently kept some of his “mementos” in his desk drawer and would show it to casual Mar-A-Lago visitors. Among those items were the “love notes” from the North Korean dictator to Mr. Trump. Another he had removed was the letter left him by former President Barack Obama.

The blacking out (redacting) of much of the search warrant language was necessary to protect both the witnesses who have testified to seeing the documents in Mar-A-Lago and to the identity of other secret sources, whose very lives might be endangered.

Apparently, Trump considered anything he touched during his time in office “his.” He considered himself to be much like a king and everything was “his.”

Even if the documents were as ordinary as the menu for breakfast (and they weren’t) removing them from the White House was wrong and an obstruction of justice, and, since the many polite government requests to give them back ended with only a partial return of the papers, the FBI conducted its raid on Aug. 8th. And, to make matters worse, the ex-president and his cronies attempted to move the documents around to prevent the government from seeking their rightful return.

As the “New York Times” put it:

“The investigation into Mr. Trump’s retention of government documents began as a relatively straightforward attempt to recover materials that officials with the National Archives had spent much of 2021 trying to retrieve. The filing on Tuesday (Aug. 30)  made clear that prosecutors are now unmistakably focused on the possibility that Mr. Trump and those around him took criminal steps to obstruct their investigation.

Investigators developed evidence that “government records were likely concealed and removed” from the storage room at Mar-a-Lago after the Justice Department sent Mr. Trump’s office a subpoena for any remaining documents with classified markings. That led prosecutors to conclude that “efforts were likely taken to obstruct the government’s investigation,” the government filing said.

The filing included one striking visual aid: a photograph of at least five yellow folders recovered from Mr. Trump’s resort and residence marked “Top Secret” and another red one labeled “Secret.”

It is time. LOCK HIM UP!

Beware of So-Called “Questionnaires” Posing As Objective: It’s the GOP At Work