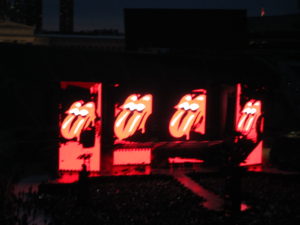 The Rolling Stones played for the 8th time at Soldier Field on Friday night, June 21st, beginning at 7:30 p.m. with the lead-in act, St. Paul and the Broken Bones from Alabama.

Before arriving at the venue, we were told not to bring large purses. Specific dimensions were sent and a suggestion was made that we use quart-sized plastic bags. All metal objects had to be placed in trays as we went through metal detectors up front. I was able to get my plastic bag contents down to cash, one credit card, my cell phone, my small camera, 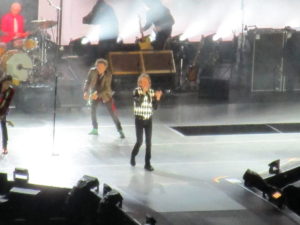 We were waaay up in the stadium and these were taken with a Canon PowerShot with a 40 zoom.

and opera glasses (that turned out to be useless). Tickets in the nosebleed section were $69.50 and we climbed a long time. (I told my husband, “I’ll just keep climbing until I pass out.”)

The booths selling shirts and the like ($45 for a regular tee shirt; $85 for a hooded sweatshirt) were set up in a particularly problematic way. You  could barely walk through to get to your section because of the presence of several tables selling merchandise. 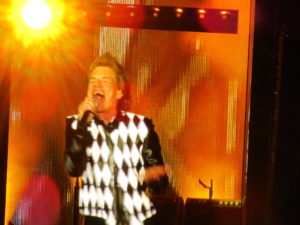 Finally, we climbed to the 18th row in the highest section. The night was cool and rain threatened, but the four things that amazed me most about the concert this night were as follows: (1) Mick Jagger definitely is in amazing shape for someone his age (75, born July 26, 1943) (2) Jagger is back from the heart surgery that had originally postponed this concert date, but was re-programmed for the original date shortly after he had stents placed in his heart (3) my new small camera (Canon Powershot) with a 40 zoom did a pretty fair job of getting pictures from this far away and (4) how far other concert- 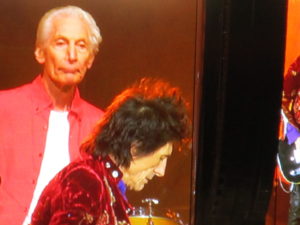 goers had come to hear the Rolling Stones. We heard Germany, England, New York, Cleveland, Minneapolis and St. Louis and everyone around us was from out-of-town. In fact, following the concert, we had to provide directions to a gentleman who was to meet his friends at Scout bar on Wabash and Michigan and had little idea how to get back there.

Mick shared that the Stones had played Soldier Field 8 times and Chicago 38 times over the years since 1964. Only 2 of the songs were from later than 1981. Which, as the Chicago Tribune noted, is exactly what the vast majority of fans paid to see. 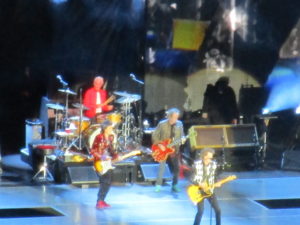 Since 1998, the stones have produced only 2 studio albums, yet they play their hits differently each night. I can vouch for this, having seen them for the first time in 1982 in Cedar Falls, Iowa, at Northern Iowa University and, after that, during the Steel Wheels tour, the Bridges to Babylon tour (2x), the VooDoo Lounge tour, the Tattoo You tour, twice inside the United Center (one of them the No Security tour) and at the Indianapolis Speedway in 2015, as well as tonight’s No Filter tour. Mick had never danced more and I had never seen Charlie Watts AND Keith Richards smile more onstage. 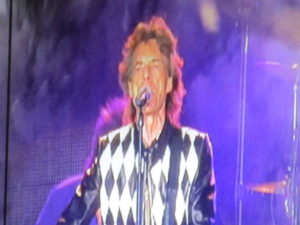 To me, tracking the band in person for 37 years, Keith Richards looked the most changed. Something about the expanse of forehead looked very different. The joke about Keith is that he has looked like he is at death’s door for at least 40 years. He really did look different to me, tonight, and his comment when he spoke was, “I’m happy to be anywhere.” 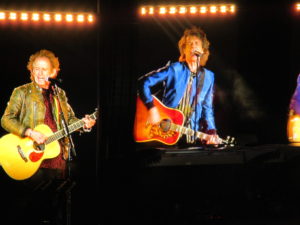 The Stones have weathered sixties drug busts, seventies heroin addictions, the Jagger/Richards split during the eighties, Keith’s brain surgery after he fell out of a tree in 2006 and, now, Mick’s heart surgery (stents) in March. They sound as good as ever, and Mick danced more, if possible, than I’ve ever seen him, in a “Look! I’m still standing!” move. It was a great show! Even the weather cooperated. The downside was that it took us a full hour to walk across the street from the stadium. 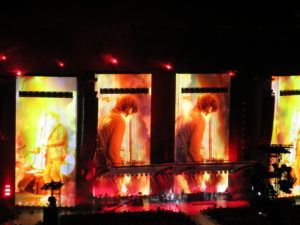 2) Let’s Spend the Night Together 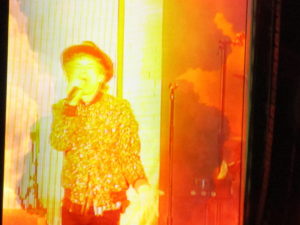 6)  You Can’t Always Get What You Want

9)  Sympathy for the Devil 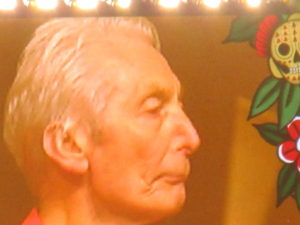 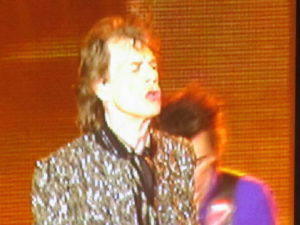 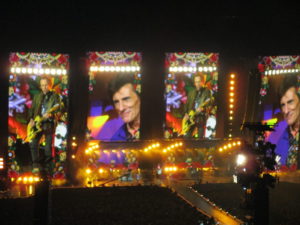 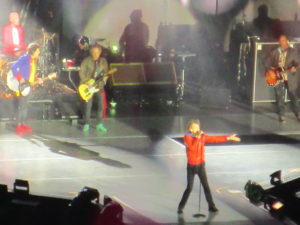 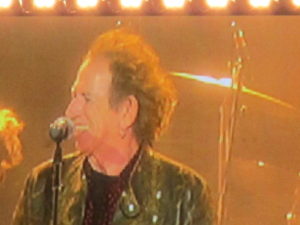 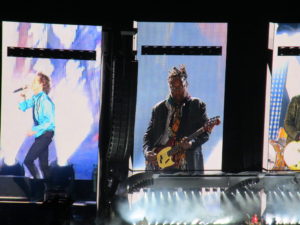 The Dead Don’t Die: Observations from the Theater