Writer-director Michael Larnell tells the true story of Lolita ‘Roxanne Shanté’ Gooden (Chante Adams) in “Roxanne, Roxanne.” She was a young teen who journeyed from the battle rap queen of Queensbridge, NY, to shattering the glass ceiling with her iconic freestyle “Roxanne’s Revenge” over the beat of Untouchable Force Organization “Roxanne, Roxanne”.

Afficionados of hip hop will have fan moments over the subtle hints of hip hop gems along the way. The film is refreshing because it offers a new perspective, a woman’s perspective.  Executive-Producer Roxanne Shanté herself made sure that the film was centered around music, bur it also had moments where viewers understood the other side of music.

Roxanne Roxanne revolved around a young girl being immersed in an adult world too quickly. It’s a similar  situation with most talented artists who become famous too fast.

The film was well acted by Hollywood’s finest Nia Long (Boyz N The Hood) and Academy Award winner Mahershala Ali (Moonlight) . The real breakout star has to be Chanté Adams who, in her first role after graduating from Carnegie Mellon University, s a newcomer captures the essence of Roxanne Shante. 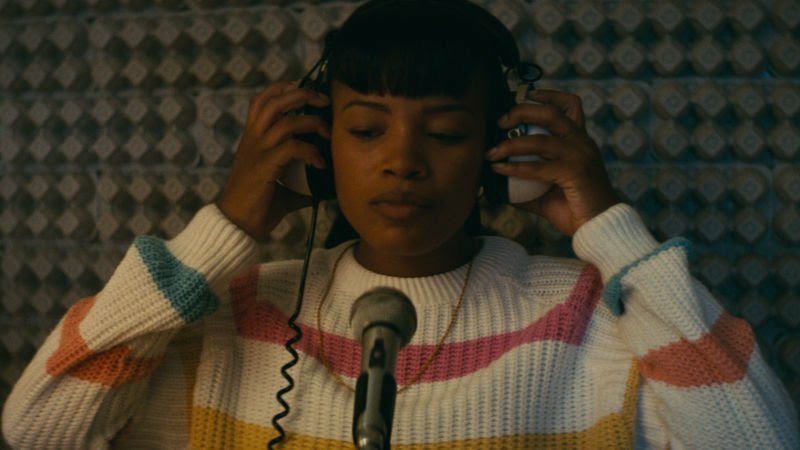 You’ll be drawn to the intensity and chemistry of Nia Long and Chanté Adams on screen. The mother daughter dynamic between the two is powerful. Nia Long’s performance will hold your attention. It is as though she’s trying to teach a life lesson to the viewer.

Shanté’s story was a story that needed to be told, but it was more suited to be on Netflix rather than be released as an actual theatrical release like Straight Outta Compton or Notorious. As a fan of the Hip Hop genre I’m quite disappointed with myself for previously missing out on a performer as talented as Roxanne Shante. This is why more Hip Hop biopics such as (NOTORIOUS, STRAIGHT OUTTA COMPTON) should be done PROPERLY. It helps to highlight the story of under-appreciated rap pioneers all while complementing the message that not everything comes easy and a mother is usually right.

ROXANNE ROXANNE is rushed but well put together story about a young African American teen girl who, although struggling against great odds, opened a door for many to follow in the hip hop industry.

That, alone, is noteworthy.

**************
(I know almost nothing about rap music, but I did see the recent Tupac Shakur docu-pic, which came out at the same time as ‘Wonder Woman.” I confess that after Slim Shady and Eminem and a brief shining moment when L. L. Cool Jay was my son’s hero (in his high school years) and, as a result, he and a friend went into a studio and made a rap record with their own money, I haven’t given rap music much thought since. I’ve heard the names, of course, but I’ve tried not to hear the rap ballads/albums. This is a good area—along with Marvel movies—for a young man like Zayin to follow. My one comment is that it seems sort of hypocritical that this film wasn’t helmed by a woman. The thing that is all the rage this year at film festivals: flicks directed by women. It’s the coming thing, and it’s about time. Here is a movie about a female rapper, but it’s directed by a man. Does anyone else find that odd in the year of “Lady Bird” (nominated as Best Picture and directed by Greta Gerwig) or Miranda Bailley’s film at SXSW or the fact that 40% of the films at the 53rd Chicago International Film Festival were helmed by women? I’m just asking, not telling. C.W.)

Avengers Infinity War Anticipation: Will It Live Up to the Hype ?

The Impact of “Black Panther” in Film and Society