Samsung Television Bites the Dust; We Hit the Road 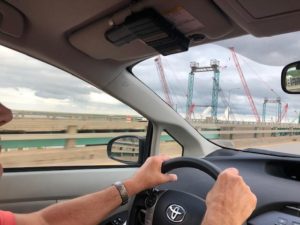 Bridge views on I-74 bridge.

So, our 17-year-old Samsung television has developed an annoying habit of flickering as though the vertical hold has gone out on a TV, circa 1950. Remember when you used to call the television repairman to come fix this annoying glitch, and, as soon as he would arrive, the TV set would be fine?

At any rate, for the past several months the debate has been over whether it was the TV set or Media Com. My husband chose to defend the TV set’s constant, annoying flickering and vertical hold problems and blame it on the box from Media Com, our television provider. It was getting to the point that I felt I might become like a Japanese child and fall on the floor having a seizure before he would admit that we had to do something to get to the bottom of the problem. 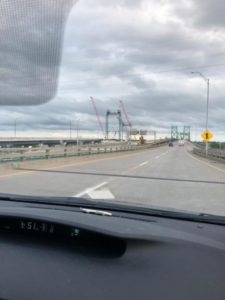 Then came the news that tariffs will probably cause prices of everything to rise precipitously. These price increases may not have taken effect yet, but they will in time, and that was the key to getting in the car and driving over to Best Buy and selecting a new Samsung television set (57″) and it will now be installed on Thursday.

Since the new Samsung is at least 5 inches larger than our former set, the next purchase may well be a new couch. I have hated the current couch ever since we bought it. I should never have given it to the always-impatient spouse’s desire to simply be “done” with shopping for a sectional for our family room. It was from a sketchy place (that has since closed) and the only thing it had to recommend it was that (a) it had kick-out foot rests, which my husband thinks is the Cat’s Meow (does anyone in the year 2019 still say “The Cat’s Meow?”) and (b) it was large. It does seat a lot of people, but parts of it have gotten worn down and the support struts underneath were never up to the challenge(s).

There is a small chance that we can move the two pieces we purchased and re-arrange them further back in this room, [which we added on to our house in 1993.] Since the game table was taken to Austin and sacrificed to become our temporary kitchen table (now replaced with a REAL kitchen table set), we have more room behind this couch. I moved the couch table into the front living room, so maybe we can move the green couch(es) around and give ourselves more room to sit back and view the new TV set when it arrives?

Thus, we drove across the I-74 bridge, which has had construction going on it for months and is not due for completion until mid 2020.  One lane traffic into Iowa. I counted at least 18 cranes. Sorry the pictures are not of better quality, but the driver refused to slow down and I had to get whatever photos I could of the many cranes replacing the 1930-era Interstate bridge that joins Iowa with Illinois.