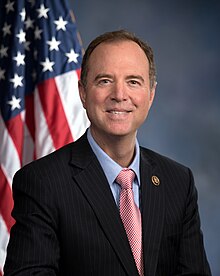 Adam Schiff, Democratic Chair of the House Intelligence Committee, on George Stephanopoulus on February 24, 2019 had the following message for the nation about the Mueller investigation.

Q:  George Stephanopoulus:  What do you hope to learn when Michael Cohen testifies tomorrow (Feb. 27th)?

A: Well, many things. Why the false statements when he first appeared before our committee? Did his testimony go beyond what he testified to us the first time we looked into Moscow Trump Tower? Who else would have been aware of the false testimony he was giving? What other light can he shed? What else can he tell us about the Trump Tower New York meeting or any other endeavor he can shed light on.

Q:  GS – What about the Trump campaign’s finances? You’ve suggested that is the new front in your investigation.

A:  AS – This is something I’ve been concerned about for 2 years now. We weren’t really permitted to explore it when the Republicans headed the committee. We are learning the perils of ignoring the financial issues and crossing what the president called his “red line.” What we’ve learned to date about Moscow Trump Tower is chilling: As Donald Trump was campaigning for the presidency and was telling the American public that he had no dealings with Russia, he was privately negotiating with the Russians to make what may well have been the most lucrative deal of his life, even reportedly offering an inducement to Putin to make it happen. (*Note: it is reported that DJT offered Putin a penthouse apartment for assistance in helping make the deal go through.) If DJT was discussing removing sanctions against Russia, whether it is criminal or not, it is deeply compromising to our national security, so those issues have to be probed, and they include money laundering as well.

Q: GS – In regards to the Mueller investigation if the President did not collude but, if that’s not criminal, does Mueller have a responsibility to report on it or no?

A: AS – He does, in fact, have a responsibility to report  it, and, in fact, if you take the position—and I think it’s a  flawed one—that the President cannot be indicted and the only remedy for improper conduct is impeachment, then you have the necessity to report that to Congress, or essentially the President has immunity. That cannot be allowed to be the case. Bill Barr has committed in his testimony to making as much of the report public as he can. The regulations allow him to make ALL of it public, and we’re going to insist on that. And more than that, we’re going to insist on the underlying evidence because there is certain evidence that is only in the hands of the Department of Justice that we can’t get in any other way….the conduct of Roger Stone and Paul Mananfort, for instance…there’s just no way to get the evidence that was seized except going through the Department of Justice and we can’t tell the country what happened without it.

Q:  GS – If you decline to prosecute someone, then the DOJ has said the information, the underlying evidence, should not be released.

A:  AS – But, George, the Department has violated that policy repeatedly and extensively to a great extent over the last 2 years. In fact, I’ve had this conversation with Rod Rosenstein and others in the Justice Department as they turned over thousands and thousands of pages of testimony in the Clinton e-mail investigation and there was no indictment in that investigation. This was a new precedent they were setting, and they were going to have to live by this precedent whether it was a Congress controlled by the Democrats or the Republicans. So they’re going to have to abide by that. And I think, also, that, apart from the precedent they’ve already set, that the public has an intense  need to know, here, which I think overrides every other justification.

A:  AS – Well, we will obviously subpoena the report, we will bring Bob Mueller in to testify before Congress; we will take it to court, if necessary, and, in the end, I think the Department understands they’re going to have to make this public. I think Barr will ultimately understand that, as well. Barr comes into this job with 2 strikes against him. He applied for the job by demonstrating a bias against the investigation. He’s also been shown to not follow the advice of ethics lawyers—indeed, that was part of the reason he was hired. If he were to try to withhold, try to bury any part of this report, that will be his legacy, and it will be a tarnished legacy. So, I think there will be immense pressure not only on the department, but also on the Attorney General to be forthcoming.

Q:  GS – You’re talking about public pressure. Are you prepared to take the Administration to court?

A: AS – Absolutely! We are going to get to the bottom of this. We are prepared to share this information with the public and if the president is serious about all his claims of exoneration by this report, then the President should welcome this report.

Q:  GS – Do you have any evidence at all that the President colluded?

A:  AS – George, there is ample evidence of collusion, and it is very much in the public record. It’s everything from Paul Mananfort from sharing polling date—and not top-line data “this is why we think Trump is gonna’ win data”—but raw data, complicated data. We’ve seen evidence of Roger Stone in communication with WikiLeaks. We’ve seen Trump’s son having a secret meeting in Trump Tower that was presented to him as part of the Russian government’s attempt to help the Trump campaign. His acceptance of that help, his interest in getting that—all of that is evidence of collusion. Whether that will amount to a criminal conspiracy that can be proved beyond a reasonable doubt, we’ll have to wait for Bob Mueller to tell us but to not see what is clearly in front of us means that you clearly don’t WANT to see what is in front of us, because it is quite abundant.

Adam Schiff says the Administration will be taken to court if necessaryAdam Schiff speaks outGeorge Stephanopoulus on Feb. 24Mueller's Russian probePaul Mananfort and Roger Stone are evidence of collusion

Michael Cohen on “Late Night”: Were the Congressional Hearings of 2/27 the “Not-Ready-for-Prime-Time Players”?