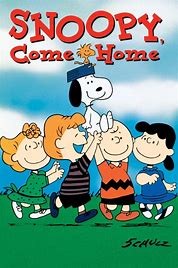 The1972 film “Snoopy, Come Home” is the rare exception to the other films involving Charlie Brown and the “Peanuts” gang in that (1) Charlie Brown’s name does not appear in the title, and, (2) When originally released, it earned back only $245, 073 of its one million-dollar budget.

The failure to do well at the box office can be attributed to the fact that Cinema Center Films was being shut down. They did not do the necessary marketing. “Snoopy, Come Home” would be Cinema Center’s last release and would also introduce Woodstock and Franklin to fans. 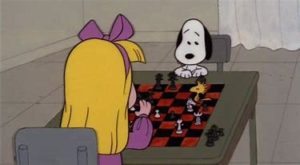 Snoopy visits Lila in the hospital.

The plot—also featured in the comic strip—involves Snoopy’s visit to his first owner, a little girl named Lila, who is hospitalized for three weeks and is very lonely. In a scene that would make no sense to today’s youth (“Why didn’t she just send an e-mail?”) Lila writes a letter and mails it to Snoopy, asking him to come visit her. Charlie Brown also uses an old-fashioned manual can opener to open Snoopy’s food—definitely an antique. 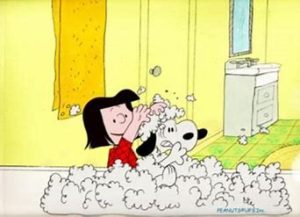 Clara decides she’d like to keep both Snoopy and Woodstock as pets.

Snoopy takes Woodstock, the bird, along as his companion in a trip through the woods, and the two have adventures, including being captured by a little girl along the route who ties Snoopy up and puts Woodstock in a bird cage. Clara (not named, but identified in the credits) wants to keep the two as pets, and she is quite persistent in chasing the pair as they try to escape.

Meanwhile, back at Charlie Brown’s house, Lucy says to Charlie, “You’ve got a used dog, Charlie Brown,” as they figure out  the mystery of Lila of the letter. Charlie articulates his life philosophy to Lucy, saying, “I have a philosophy that no matter how bad things get, they will always turn out good in the end.”

The songs this time around are by Richard and Robert Sherman, and the singing is considerably better than on  “A Boy Named Charlie Brown.” The vocal credits are also different, going to Chad Webber as Charlie, Robin Kohn as Lucy, Stephen Shea as Linus, David Carey as Schroeder, and Johanna Baer as Lila. Bill Melendez directs again, and the explanation for the musical upgrade is that he wanted the film to be more Disney-like.

Is the film on the right wave-length for today’s youth? In the days of WWF and violence, it would seem so.

6% of the film has boxing or struggling over Linus’ blanket between Snoopy and Linus.

There is an extended sequence involving a battle for Linus’ blanket between Linus and Snoopy. Following hat, Snoopy and Lucy box (Snoopy wears the boxing glove on his nose). These scenes of active jousting take up at least 5 minutes of an 83 minute film ( 6%.) Maybe one explanation for these scenes would be it’s what kids do, or we can take Peppermint Patty’s words from the film and use them to explain, when she tells Charlie, “I’m an action type of person. When nothing is moving, I feel low. That’s why I always keep moving.”

Kids might notice that, when Snoopy and Woodstock leave home to go visit Lila, Snoopy carries a small valise that resembles a briefcase. Yet, from this briefcase Snoopy is able to take: a helmet; a football; a cooking pot; a frying pan; a complete dinner service; a large, rolled-up sleeping bag; an old-fashioned alarm clock; and a strange musical instrument that I couldn’t identify (mouth harp?), which somewhat resembled a harmonica, except that it looked like a key. That and the antique can opener were both artifacts that Seth Meyer might hold up on his show and ask a young person to try to identify. I’m an old person, and I couldn’t tell you what the “instrument” was that Snoopy plays when he and Woodstock are camping in the woods. 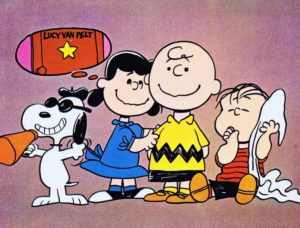 The good advice that was abundant in the previous Charlie Brown film is here, also.  Example:  “No one likes a moody person. If you go around in a mood feeling sorry for yourself, you do it alone—and I mean alone!” Or there is this profound bit of shared wisdom from Linus when he says, “Happiness lies in our destiny, like a cloudless sky before the storms of tomorrow destroy the dreams of yesterday and last week.” That pronouncement causes the retort: “I think that blanket is doing something to you.”

There’s a recurring theme of prejudice against canines. When Snoopy tries to go to the beach, he is kicked out because of a No Dogs Allowed sign. This discrimination continues throughout the entire film, up to and including Snoopy being banned from a library, a hospital, and an apartment building.

The songs are better in this Peanuts film, including “Fundamental Friend Dependability” and the song with the lyric, “I still remember a summer gone by. Why was it over so fast? Why can’t our summertimes last?” The explanation is that Melendez wanted the film’s musical score to be more like a Disney film.

Charlie Brown, as usual, is the lovable loser. He says, at one point, “I had 14 pen-pals once, but I did all the writing.” (Isn’t that always the way?) After Snoopy disappears without any explanation, Charlie moans, “I never know what’s going on.”

That feeling that we are the ones who “never know what’s going on” will keep Charlie Brown and the gang relatable for decades, even though so many visual constants of 1972 now appear dated. The beautifully colored woods that Snoopy and Woodstock hike through will be gorgeous on the large screen when the film begins showing at theaters on September 29th, October 3rd and October 5th as a re-issue.