Tag: Anatomy of a Screenplay

Weekly Wilson Podcasts of May 7th and May 14th 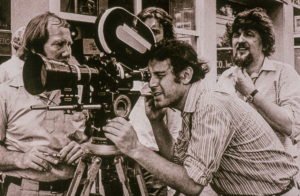 Whoever called in from Chicago (Dan’s home town), we apologize for not getting to your question. The period of time on hold tends to be quite long, with up to 6 commercial breaks, and this is not the first time that a caller has simply given up on holding. (The last one was from Maryland).

Dan and I covered a lot of ground, talking about his stints in both Italy and China and our thoughts on the future of the movies. Dan was quite optimistic, compared to me,  about the survival of theaters, as he pointed out the historic developments that were predicted to be the death knell for movie theaters, like radio, television and streaming services.

Dan lived in Las Vegas for many years, spent several months in Italy, and now lives  Raleigh, North Carolina, near his married daughter and her family.

In addition to talking about the future of film in America, we touched upon how one secures dual citizenship from a foreign country, which Dan did as a result of his Italian mother.

Next week, author Michael Serrapica (Conned Conservatives and Led-On Liberals) will join me for a discussion that will, no doubt, touch on politics and on the four free books I am giving away on May 15, 16 and 17th. (The Color of Evil; Red Is for Rage; Hellfire & Damnation I & II).

There were 5 callers, [although one left line before we could get past the commercial to take the question].

Jennifer was the great guest I knew she’d be and we covered her cancer experiences (at age 15), her heart transplant, and the diabetes she currently fights. We also covered the costs associated with having a heart transplant, which Jennifer told me is her most popular YouTube video.

I jotted down just a few of the figures, with $640,000 for her hospitalization, $70,000 for the heart surgeon, $200,000 for the anaesthesiologist, and $80,000 for the cost of removing the donor’s heart and transferring it for transplant. She also mentioned the $35,000 a year that it costs for anti-rejection drugs and a total figure of $1.2 million. One of our callers wanted to know her out-of-pocket costs and we got figures that were in the $14,000 range for the first year.

The hour went by quickly, and I directed callers to Jennifer’s blog (www.anewheartrocks.com) and told them that it would be relatively easy to find the show when it is archived and goes up on my Weekly Wilson blog. (www.WeeklyWilson.com).

Next week’s guest is Dan Decker, AFI graduate, founder of the Chicago Screenwriting School, and author of the books Anatomy of a Screenplay: Writing the American Screenplay from Character Structure to Convergence and The Prime: The Dark Side of Light. Dan also holds dual Italian/United States citizenship and his brother is also an author.