The summer of 2015 saw the first sign of digital intrusions into our voting apparatus, first appearing in Illinois and later spreading to 21 states. Russian hacking and tampering put then-President Obama in a bad position. James Clapper, Director of National Intelligence, was concerned that Russia might be using the data to change votes. “Russia?” he wondered.

The President’s Daily Brief (PDB) security briefing [something Trump supposedly rarely pays much attention to]contained this information. But what should Obama do? In July of 2016 WikiLeaks and DC Leaks began publishing e-mails from the DNC, obtained by Russian hackers calling themselves “Cozy Bear” and “Fancy Bear.” The National Security Council was deeply concerned as the intelligence regarding Russian hacking grew more and more convincing.

Obama was torn. If he went on prime-time national television and announced the findings it might look like he was attacking Trump, linking the Republican nominee with Russia. (*This would have been a very good idea, since his wife is Russian, his heroes are Russian and, in all likelihood, his secret helpers were Russian in the election of 2016). Obama did not want to appear as though he were meddling in the U.S. election by trying to tip the scales, but NOT telling the public could create a backlash in the (very unlikely) case that Trump did win. 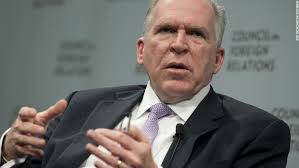 John Brennan of the FBI argued against telling the public. He was protective of the department’s sources. Brennan, however, did tell Russian Intelligence Chief Alexander Bortnikov that we were aware of the hacking. (Bortnikov, like Trump, simply denied it.

Mike Morrell, acting director of the CIA twice, published an op-ed in the New York Times on August 5th that read: “I Ran the CIA: Now I’m Endorsing Hillary Clinton.” Morrell  flat-out accused Trump of “being an unwitting agent of the Russian Federation.” Clapper was selected to brief the Gang of Eight consisting of 4 Republican and  Democratic leaders in the Senate and House, plus the Chairmen and Vice Chairmen of the Senate and House intelligence committees.

Clapper was shocked by the partisan nature of the gathering, as the Republicans disliked everything. The Democrats loved every bit of the information. He left the briefing feeling that the intelligence apparatus in the country was becoming a political football.

Even though everyone still felt that Clinton was likely to win, Vladimir Putin’s influence campaign to undermine HRC’s campaign and coming presidency went into high gear.

Meanwhile, Clapper and Secretary of Homeland Security Jeh Johnson wanted to alert the public to Russian hacking. Friday, October 7th, they released a joint statement accusing Russia of trying to interfere in the United States election.  “The U.S. intelligence community is confident that the Russian government directed the recent compromise of e-mails from U.S. persons and institutions.  These thefts and disclosures are intended to interfere with the U.S. election process.” The announcement went on to say that the authorization to do this must have come from the top in Russia. They sat back and waited for this to be a Big News Story.

One hour later, at 4:05 p.m., David Fahrenthold of The Washington Post released a headlined story: “Trump Recorded Having Extremely Lewd Conversation About Women in 2005.” This would later become known as the Access Hollywood tape. It literally blew away all other important news of the hour and day, such as the Russian hacking story. The “Grab them by the pussy” tape became “a political earthquake” and the announcement about Russia’s hacking in our election was lost in the shuffle.

Less than half an hour later, at 4:30 p.m., WikiLeaks dumped thousands of e-mails from Clinton campaign chairman John Podesta’s personal account. It included information about HRC’s speeches to Wall Street financiers. E-mails between Podesta and Donna Brazile (Chair of the DNC) were also released.

“I’ve never said I’m a perfect person…these words don’treflect who I am. I said it. I was wrong and I apologize. I pledge to be a better man tomorrow and will never, ever let you down.” (Donald J. Trump) Trump went on to pivot to Bill Clinton and saying he had done far worse and concluded, “See you at the debate on Sunday.”

A summit of the top advisers to Donald J. Trump convened and Priebus said, “It’s over.” Bannon did not agree (“What do you mean, it’s over?”) Mike Pence was dubious. “Are you fucking kidding me?” was Bannon’s response. “It’s a tape, dude.” Priebus insisted, “You don’t understand; it’s over.” Trump asked each of them to weigh in on the situation. Priebus felt he should drop out right now and avoid the worst loss in American history. Bannon insisted “Cut the bullshit; that’s bullshit.” Priebus floated the idea of Mike Pence stepping up and running with Condoleeza Rice, “W’s” former national security adviser and secretary of state. “That’s never going to happen,” Bannon said loudly. Chris Christie of New Jersey felt Trump should resign in order to protect his brand. Rudy Giuiliani felt that “Basically, you’ve got a 40% chance of winning.” Kellyanne Conway suggested contacting “60 Minutes” and doing a sort of public confessional with Ivanka on one side and Melania on the other, the women crying and Trump apologizing. Melania flatly refused.

Trump asked Bannon, “What do you think?

Although Priebus obviously was not a 100%-er, and he didn’t think Trump was, either, Bannon kept maintaining that Trump would win. He told the room: “We’re going to compare your talk with Bill Clinton’s action.”

Bannon suggested a Hilton Hotel ballroom at 8 p.m. that night with a hammerhead rally—which was a Bannon term for the diehard Trump fans wearing the MAGA baseball caps. Trump was delighted, while the others were opposed and a huge fight resulted with a compromise position at the end of it: Conway would have David muir of ABC helicopter in and do a 10 minute interview.

Bannon felt this was political suicide. Priebus again felt that Trump was toast. (“You guys don’t know what you’re doing. You’re going to go down.”) Various Republicans were coming out of the woodwork and telling Trump he should step aside for Mike Pence. Pence even released a statement: (“As a husband and a father, I was offended by the words and actions described by Donald Trump in the 11-year-old video released Saturday.  I do not condone his remarks and cannot defend them.  I am grateful that he has expressed remorse and apologized to the American people.  We pray for his family and look forward to the opportunity he has to show what is in his heart when he goes before the nation tomorrow night.”

There were rumors that Pence had given Bannon a sealed letter that urged him to drop off the ticket.

Two hours later Melania released a statement defending her husband and saying, “I hope people will accept his apology, as I have, and focus on the important issues facing our nation and the world.”

At 3:40 p.m. Trump tweeted: I WILL NEVER DROP OUT OF THE RACE, WILL NEVER LET MY SUPPORTERS DOWN! #MAGA Preparations for the ABC interview were underway. Giuiliani and Christie gave Trump an apology statement to read. Trump was surly about reading the “all political” statement that screamed Giuliani and Christie. “I can’t do this. This is bullshit. This is weak.  You guys are weak.”

Christie interjected, “Donald, you don’t understand” and Giuliani told Trump that he had to do this. Trump turned to Kellyanne Conway and asked her what were the steps to cancel out on the Muir interview. She waffled, saying all her credibility was on the line, but Bannon said, “It’s not going to happen. He ain’t going to do it. If he does do an introduction you can’t have him do a live interview.  He’ll f****** get cut to pieces.” The apology was re-written, but it was still all Giuliani and Christie and polito-speak and Trump said, “I’m not doing this.” He delcared that he was going to go down to the roaring crowd gathered for the rally. The Secret Service insisted to Trump that he was NOT going to go outside. Trump headed out, saying “I’m going downstairs. This is great.” (*One cautious word for DJT: watch the movie about Huey Long.) Conway was telling Trump that he couldn’t cancel on ABC, but DJT said, “I don’t care. It was a dumb idea. I never wanted to do it.”

Chris Christie (then Governor of New Jersey) and Steve Bannon had words outside the elevator. Christie said, to Bannon, “You’re the fucking problem. You’ve been the problem since the beginning.”

Christie was not on the plane the next day. Trump, however, was, and, following on the heels of Rudy Giuliani doing all 5 networks, defending his client, he was the only one who completed a full Ginsburg (a term used for Monica Lewinsky’s attorney who appeared on all 5 network Sunday programs on Feb. 1, 1998.)

After Giuliani had made the full Ginsburg–-a daunting task that must have been quit embarrassing and humiliating in many ways—the exhausted former Mayor of New York City who had pulled out every stop got to hear Trump say to him:  “Rudy, you’re a baby! I’ve never seen a worse defense of me in my life.  They took your diaper off right there. You’re like a little baby that needed to be changed. When are you going to be a man?” When Bannon defended Giuliani as the only one of the Trump forces who had gone to the wall for his boss, Trump responded, “I don’t want to hear it. It was a mistake. He shouldn’t have gone on. He’s weak. You’re weak, Rudy. You’ve lost it.”

Giuliani just took the abuse with a blank face as the plane took off.