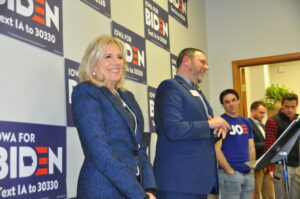 Dr. Jill Biden came to Clinton, Iowa’s Biden headquarters at 415 South 2nd Street and spoke to a crowd of approximately 30 faithful Democratic supporters who agree with former Vice President Joseph Biden’s wife that, “Anyone can tell you what they want to do, but Joe Biden can tell you what he’s done.” 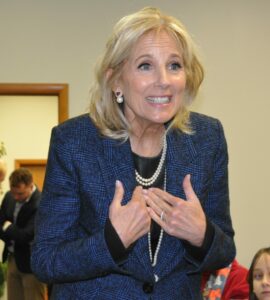 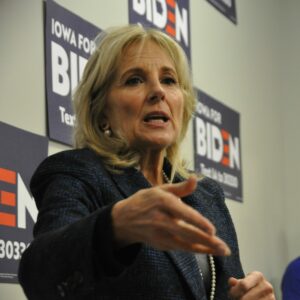 Most of us also agree with her assessment that Biden is the one candidate in the field with the national reputation and experience to defeat Trump in 2020.

A career educator (over three decades teaching at high school and community college levels), Jill Biden holds two Master’s degrees in English, education and reading, as well as PhD degrees, and continued to teach full-time throughout Vice President Biden’s time in office. She is thought to be the first wife of a Vice President to continue her full-time job while her husband was in office.

The granddaughter of Italian immigrant signalman Dominicki Giacoppa, the family anglicized the name to Jacobs and Jill Biden’s maiden name was Jill Tracy Jacobs. Her father, Donald C. Jacobs (1927-1999) became President of a Savings and Loan in the Chestnut Hill area of Philadelphia.

The attractive blonde was due in Clinton at 4:00 p.m., but, with 3 previous stops on Thursday, she arrived about 5 p.m. and was introduced by Eric VanLanker, Commissioner of Elections and County Auditor.

Dr. Biden talked about such initiatives as education, alternative energy (wind and solar), the Affordable Care Act and promised that there would be “no late-night tweet storms” if Biden were elected. With only 32 days until the Iowa caucuses, the push was on to secure Iowa voters who would commit to caucus for Biden on February 3rd and to find others to volunteer in various capacities. 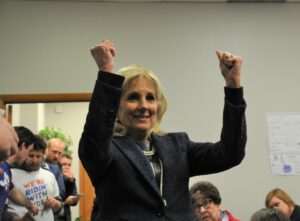 In the most amusing malapropism of the early evening, Dr. Biden noted (to her amusement and that of the assembled crowd), “We can’t stand 4 more years of a Donald J. Trump pregnancy.” Quickly correcting pregnancy to presidency, the personable blonde posed post remarks with each and every person willing to line up for a selfie.

With packing for warmer climes on my mind, I was forced to depart immediately after her remarks, leaving three books in the care of a staffer to deliver to Dr. Biden,  including “Obama’s Odyssey: The 2008 Race for the White House,” Volumes 1 and 2, and BEE GONE: A POLITICAL PARABLE. 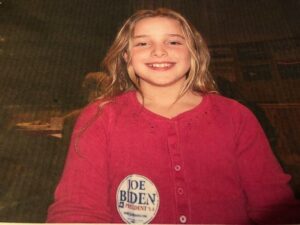 I hope she enjoys the books, including the picture of Joe Biden’s granddaughter Finnegan Biden in “Obama’s Odyssey,” Volume I, taken in 2008, when I interviewed her at the annual Jefferson/Jackson dinner in Davenport, Iowa. Hunter Biden’s daughter, the lovely 10-year-old, is now twelve years older and, no doubt, just as lovely a young lady.

Senator Joseph Biden Selected to be VP Nominee by Obama 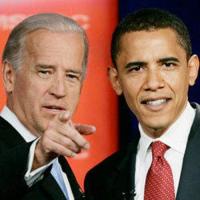 Back on January 1, 2008, I printed some remarks made by Senator Joe Biden (D, Delaware) as he appeared in Davenport, Iowa, during the Iowa primary campaign season. In light of Senator Biden’s selection Saturday (Aug. 23, 2008) to be Barack Obama’s running mate for the Democratic bid for the Presidency, I’m reprinting some of his more noteworthy comments. (For those who wish to see the original article, complete with photo of Joe Biden and Yours Truly, check the archives on www.associatedcontent.com).

There is no doubt that Senator Joe Biden is a great orator. Sometimes, he has followed in the tradition of “loose lips sink ships,” as when he used a line at an Iowa State Fair speech and failed to properly attribute it (he had attributed it appropriately in prior addresses). This furor derailed an earlier bid for the Presidency with charges of “plagiarism.”

When the position of Chairman of the Democratic Party was up for grabs, it was Dean and Biden who really stood head-and-shoulders above the field and commanded attention. (Dr.) Howard Dean had just come off his unsuccessful bid for the Presidential nomination during the “Sleepless Summer” tour in Iowa, which derailed in Iowa at the ValAir Ballroom in what infamously became known as “the shout heard round the world.” Howard Dean is now DNC Chariman, and the ValAir Ballroom derailing was nothing more than a dirty bit of Republican showmanship. (Ask Joe Trippi, his campaign advisor, if you don’t believe me). Howard Dean has been known to say a few things off the top of his head, to “lip off,” which he may later regret. And so has Joe Biden. But isn’t some candor refreshing after years of Darth Vader Cheney?

Here are a few quotes from Senator Biden’s Iowa appearance on January 1, 2008:

“I’ve been a Senator since I was 29. There are only 27 in history that have served longer than me. My Grandpa Finnegan would not believe this. Iowa is the last level playing field in American politics. You can’t do this anywhere but here. We owe you. The whole process owes you. Win, lose or draw, I’ll always be indebted to you. Absent you and New Hampshire, it’s all about the money.”

“I look forward to a country that is proud of its great heritage. The United States does not torture and does not condone torture. The world is not stable. George Bush has done more than mess up. He’s been the worst President in history…at least the worst in the twenty-first century. The next president has to know what they’re about. I am the only candidate with a specific, concrete plan to end the war (The Biden Exit Strategy creating a Federal State of Iraq.). Five years ago, when I visited Afghanistan, you could walk down the street. You can’t do that now. You have to stay in the Green Zone. We may be in the midst of losing Afghanistan.”

[This last nugget of information was seconded by a British Army member I met in Las Vegas recently, who had just completed his second tour of duty in Afghanistan and said that Britain would soon withdraw all its troops, as the situation was untenable and unwinnable.]

Biden: “You have the most dangerous and complicated nation in the region in Pakistan, armed with nuclear weapons. Their population is larger than Russia’s. It’s the place where Bin Laden lives, where the Taliban reside. Imagine a Pakistan taken over by 15% of the Muslim zealots. My God, the lack of focus we have! My god, what hat this President wrought? This is the single most consequential election of your lifetimes. If it’s about experience, well, heck, I win! There’s good change and there’s bad change. It’s not about change or experience. It’s about pragmatic action. Inaction is a decision in itself.”

Moving from the topic of national security, Biden noted that he wrote the Violence Against Women Act “back in the eighties” working alone, and that it took him six years to get it passed. He added, “Initiating change is about taking action.”‘

Biden also quoted the statistics that show him to be “the fourth most liberal Senator and the Crime Bill that helped him put 100,000 more policemen in the streets, with $10 billion of additional funds for the task. “I’ve gotten it done in the past, and I believe I can do it again.”

On the subject of Republicans, in general, Biden commented, “I’ve had it up to here with the moralizing on the part of the Republican party…Where in the bible does it say torture is good? How can a tax cut for the rich, while millions have no health care coverage and millions live in poverty, be good or fair?”

Biden ended that night by saying, “I can hardly wait to debate any of these Republican candidates. I can hardly wait. The test for the Democratic candidate for the Presidency is crystal clear: who can take these guys on and win? Who can turn this nation around?”