What the Candidates Spent Per Vote

Derek Thompson of BuzzFeed broke down the data on political spending in Iowa to determine how much each candidate and their supporters paid per vote in the Iowa caucuses.

I attended the caucuses in Des Moines as an observer at Precinct #4 in Clive. The building housed a management investment firm, DeWray Capital Management, at 1301 University. When we arrived at my friend’s original polling place, we learned that it was a very small precinct, but Rick Santorum was expected, in person, in Clive, so it was to Clive that we went next. 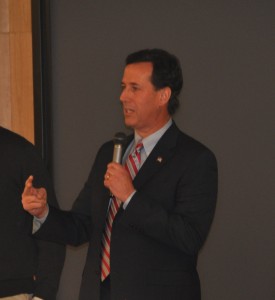 Rick Santorum asking Clive Precinct #4 voters for their vote on caucus night. He came within 8 vote of winning.

We could barely get inside the door to hear the pitches for each of the candidates. I actually ended up handing my Nikon D90 to a man who was at least 6’ 7”, and asking him to see if he could get a picture of Santorum, whom we could hear, but not see. Santorum was making a pitch for 2-parent families and talking about how people need to work and get married. He said, “You can’t mention or promote the word.  We need someone who is going to draw a strong contrast (to the incumbent).” Rick Santorum said he stood for limited government, lower taxes and less government and added, “I’ve put forth a balanced budget. I would balance the budget in 5 years. I also have the experience. He claimed to be the major author of 2 pieces of legislation on Syrian and Iran.  He ended by saying, “You need a leader who will make sure that tour enemies will fear us and our allies will trust us.” Santorum did not make mention of his remark (on “Meet the Press”) that he would bomb Iran if they crossed his “line in the sand.” Santorum said that those who participated in the Iowa caucuses would be better leaders because they came to Iowa.  “If it were not for the caucuses, it would just be media buys and TV ads.  If we’re fortunate, Iowa will be one of the battlegrounds.  People like me criss-crossed this state.  Come 2012 we’re gonna’ put it back in the Bush column.  Whatever differences there may be, they pale into insignificance (with the incumbent.) Santorum cited the federal take-over of the auto industry, never once mentioning that, without such intervention, there would now BE no auto industry in the U.S. He also talked about the financial bail-out of Wall Street and Health Care, saying it represented 1/7 of our GDP. He claimed that the failed stimulus plan cost 4 million jobs and said, “Iran is on the verge of nuclear weapons.  This is the record of this administration.” (*Actually, much of it is the legacy of the failed administration of George W. Bush.) He cited the Hyde Amendment of late 70s and said, “We must pray like it all depends on God and work like it all depends on us, because it does.” At no time did Santorum make mention of Obama’s successes such as taking out Osama bin Laden, getting any health care help out to the masses at all, or bringing home the troops from Iraq. 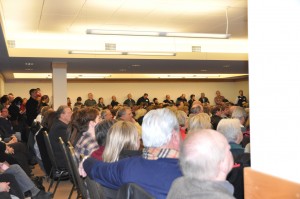 At this point, “defeat Obama” clipboards were handed out and comments were made about what a powerful Republican voting block “Clive 4”is. (“We need your help.”)

After Santorum finished, representatives for the other candidates spoke on their candidates’ behalf. 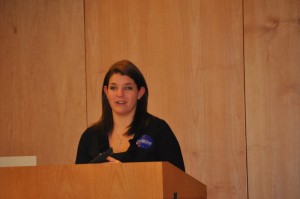 First up was a young woman in a black top and tight red pants with gold sparkly flats. She was dressed inappropriately for such an elite group. She did not speak well and looked as though she were no more than 21 years old. Her name was Christina Messinia and she espoused Christian values and the values of Ronald Reagan, calling Bachman “an inspiration” and “fearless.” Her pitch was weak.

Ron Paul’s grandson, 13-year-old Robert “Robb” Paul came to the microphone next, accompanied by his mother Kelly, wife of Rand Paul.  She mentioned her 21 years of marriage and ‘cousins by the dozens” and then let young Robb deliver a message about his grandfather, the 74-year-old Ron Paul.  Kelly cited the fact that only 4 U.S. Congressmen stood up for Ronald Reagan when he wished to run for President, and one of them was Ron Paul. Kelly mentioned that Ron Paul had predicted the economic 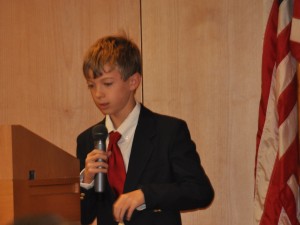 Robert "Rob" Paul, son of Rand Paul and grandson of Ron Paul, delivers a pitch for his 74-year-old Grandfather in Clive.

collapse and went on to say that he would make $1 trillion in cuts without cutting Social Security or the national defense budget.  She also said, “He (Paul) believes that war is not something we should go into without a Congressional declaration of war.” Kelly said, “National polls show him defeating Barack Obama in a head-to-head combat,” which she quickly changed to “head-to-head match-up.”  Then young Rob had his say and was very cute. 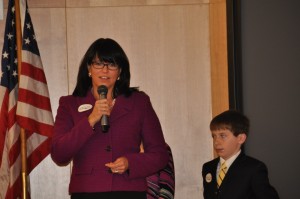 Newt Gingrich had sent a married daughter from one of his 3 marriages.  Her name was Jackie Cushman and she brought her 2 children, a boy and a girl, whom, she said, would have to write a paper about the experience of the Iowa caucuses “as a civics lesson,” which caused her daughter to roll her eyes.  Ms. Cushman rambled on about how Newt was the son of a 27-year World War II infantryman who served at Verdun and “A man who would risk his life for his dogs.” She said, “He is a doer not a talker,” although the impression I got of Newt at his rally here in town is that he is more of a talker than a doer. 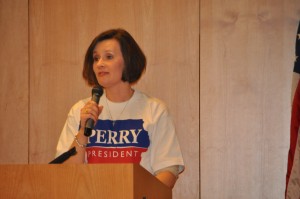 Jennifer Hayes, speaking for Rick Perry at the Clive Precinct #4.

Next up was Jennifer Hayes, who said, “I’m not a member of his staff. Just a follower.” She declared that she became a follower when she met Perry at church on Sunday. She cited his track record and “the person that he is.” She said she was “tired of politicians saying one thing and doing another.  As the mother of 3 children, I want my country back.” It was about this point in time that I noticed that the audience did not have one single brown, black or any other ethnic face. It was singularly old and white.

Ambassador Mary Kremer spoke on behalf of Mitt Romney, citing her 13 years in the state legislature.  She said, “To whom much is given, much is expected.” Mary said that the 4thprecinct was “a bellwether precinct.” She also said, “It’s not so much who wins, 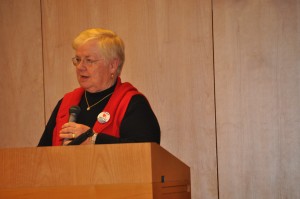 it is that everyone can who comes here to show us who they are, what their values are. “ She then touted Romney’s leadership skills and his ability to create a vision of the future and said something about, “The world is a better place if the next century is an American century.” Ms. Kremer added, “It is a very different thing to get something passed than to get something implemented.” She claimed that every leadership opportunity Mitt Romney had encountered had been “a success,” although Wikipedia notes how his Mormon 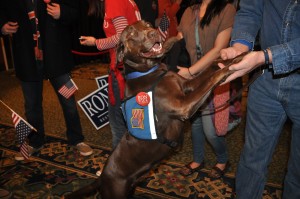 trip to France to try to convert the French to Mormonism did not go so well, at first. Of Obama, Ms. Kremer said, “On his best day he says, it could be worse.  In my view, worse would be having a second term for our current president.” She described Romney as steadfast (despite evidence that he has changed his position(s) many times) and said, “He would never do anything in office that would embarrass the country or you or me.” (*The Ambassador must have a crystal ball to know such things.) She ended her remarks by saying, “Romney is the one candidate they (the Democrats) fear more than any other.”
That last part is probably true, even if the other parts weren’t. The Clive group did go for Romney in polling, although my hometown county (Buchanan) went for Santorum, which is disappointing, and Pocahontas County also seemed smitten with Santorum. What I have read about his taking his dead child home so his other children could play with it and subjecting his unborn child and pregnant wife to possible death, rather than a therapeutic abortion, also did not make sense. Santorum also said, on the most recent “Meet the Press,” that he would bomb Iran. 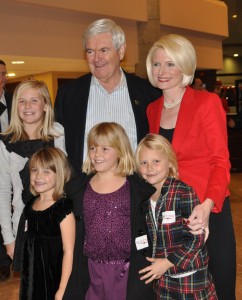 After we left Clive, we went to the downtown Marriott, in search of the Ron Paul After-Party. It turned out that we were at the wrong Marriott. The streets of downtown Des Moines were deserted and there were many parking places on the streets. We went inside and ordered one drink and, during that brief period, while we talked to other caucus observers from Wisconsin (one named Moriarty), we learned that we should have gone to the Ankeny Marriott for the Ron Paul After-Party and I was able to get a picture of Newt Gingrich, his wife and entourage.

We drove out to Ankeny to the Marriott and just missed Ron Paul’s remarks to the crowd assembled. I took pictures of a dog named Reeses wearing Ron Paul buttons and we left and went home.

It was a very dull night out. “When did the Republican party become the party of the emotionally unstable?” asked David Letterman on his January 4th program.

In Humor and Weird Wilson-isms, Politics 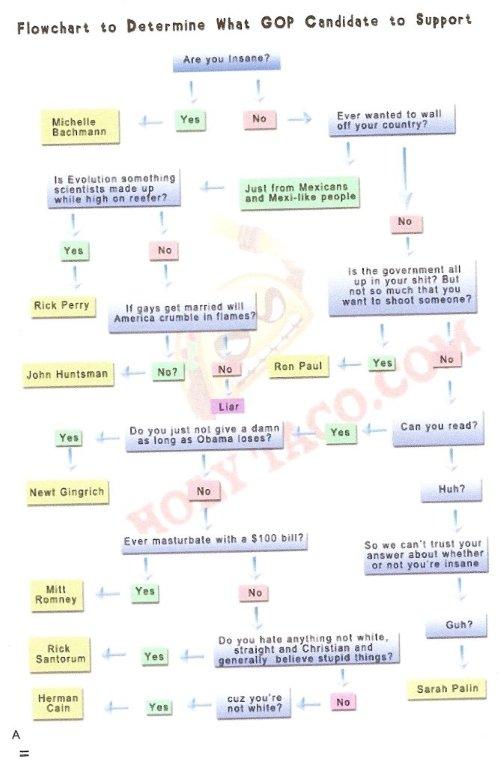 A friend, who knows I am fond of

following politics at the caucus

level, sent this to guide me in

I hope you find it helpful.

In the wake of Michele Bachmann’s pulling out all the stops, including bringing in Travis Tritt and “meat sundaes” to her tent at the Iowa Straw Poll, is it any wonder that, after 17,000 votes were cast, she was pronounced the winner by a slight margin (200 votes or so) over Ron Paul, who also had his “Dump Bernanke” tank and the “dollar slide” AND the best tent position. Add to that Bachmann’s claims to being “a 7th generation Iowan” and it doesn’t seem too surprising that she won the straw poll, which is about as unscientific as you can get and seldom predicts the winner, anyway.

That is why this line from Matt Strawn, Iowa Republican Party chairman, seems disingenuous:  “I think for the first time in a long time, there’s probably more uncertainty over what the ultimate finish will be in Ames.”  My reaction to that: “Ha!” I wrote a piece that appeared yesterday that pointed all the above out and drew the obvious conclusion that Bachmann would do well. She did. What is Matt Strawn smoking or eating over there in Ames?