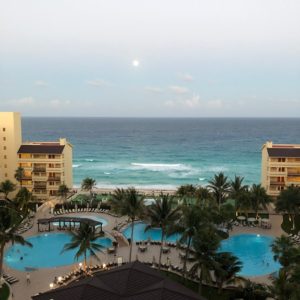 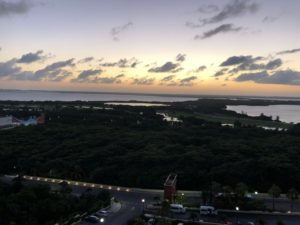 The view from the Royal Islander lagoon side. 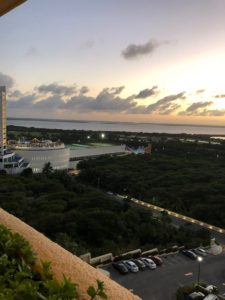 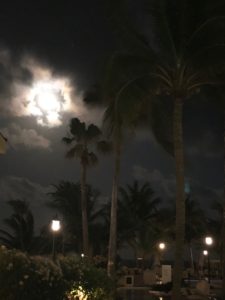 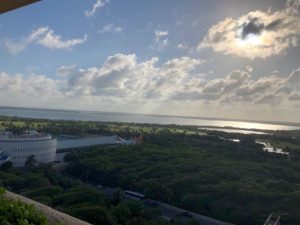 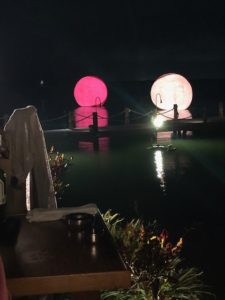 We’ve been here in Cancun, Mexico, since April 6th.

In that time, we have watched Notre Dame burn down, eaten at fine restaurants, and had great times with good friends and family.

One of the nicest places we dined was Harry’s, although Captain’s Cove is a long-time favorite. We have been coming to Cancun at Easter since 1991, which is 28 years. Our unit at the Royal Islander on the 9th floor was purchased in 1994 and our unit at the Royal Sands in 1997.

Our Royal Islander penthouse unit only has 3 years remaining after this year and, therefore, the pictures here focus on that “home away from home.” Last week there were 7 of us in our unit; this week only 4.

In addition to Harry’s, we tried Fred’s this year. I had the crab and it was delicious. We were supposed to dine within the J.W. Mariott tonight, but our plans changed and we decided to have one last meal at the Royal Caribbean, which is scheduled to close in July and then re-open later, but not as a time share.

The weather today was extremely windy, but the temperatures have been wonderful: balmy and warm. Another Easter vacation for the books.

Week Two in Cancun, Mexico at the Royal Islander Commences 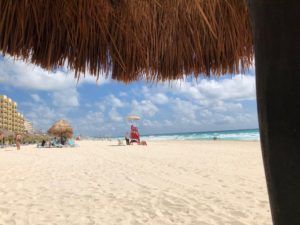 “Game of Thrones” premieres tonight, so the entire idea of dining out and about in Cancun will give way to a chicken dinner delivered to and eaten in the room. One of the nice features of the Royal Resorts is that we have two U.S.  television channels, one from Detroit and one from Jacksonville, Florida. Therefore, we aren’t missing out on favorite programs. 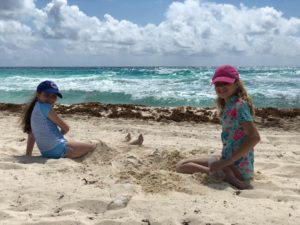 Week One ended with a family euchre tournament in which a 10-year-old (Elise) bested the field.

Week Two commenced with sending the son and his family back home to Austin, despite reports of tornado winds and bad rain. The daughter made it out and returned to Nashville. The niece and husband presumably are back in Boston. The Illinois contingent, as well. 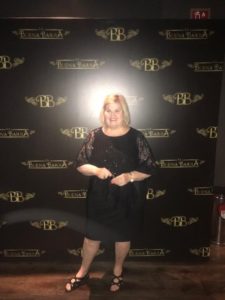 Evening out in Cancun.

So, this year, during week two, we will try out two new restaurants: Fred’s (seafood) and L’Angostino’s (Italian, within the J.W. Mariott). The other restaurants will be staples: Captain’s Cove, The Conquistador (formely of the Royal Mayan, now located at the Royal Islander).

We learned some news about our penthouse unit at the Royal Islander while here, at a meeting. We bought it in 1994, although we had been coming to Cancun since 1991 and staying at the Fiesta Americana Condessa and rented one year at the Royal Mayan. In 1997 we bought a week at the Royal Sands (just over). 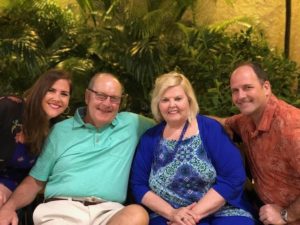 Over the years, the upkeep on our time share(s) has been quite good, although the replacement of art work at the Royal Islander in recent years took out tasteful pictures and replaced them with questionable paintings that resemble nothing so much as paintings on velvet. 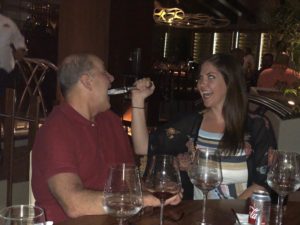 Good times with the wacky daughter and her dad (Harry’s in Cancun).

Still, the unique view of the ocean from 9 floors up (the highest any Royal property goes) and the central location in the property makes 4492 like “home away from home.” We will miss it and it will mark a passage from young to middle-aged to old, in many ways, since the turning over will mark a span of 30 years of vacationing in the same spot at Easter, which moved from one week to two in 1997. 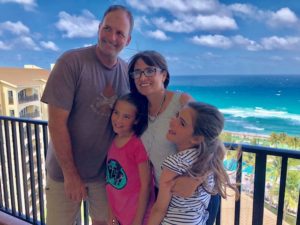 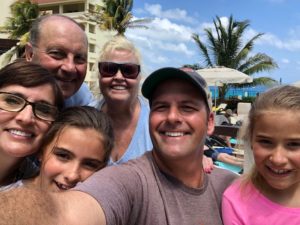 Everyone but Stacey in this one, on the bridge at the Royal Islander.

I am posting a couple of pictures from where I am hiding out till it truly IS spring (or summer, at this rate), which is Cancun, Mexico.

Enjoy. Or don’t. You have my sympathies. 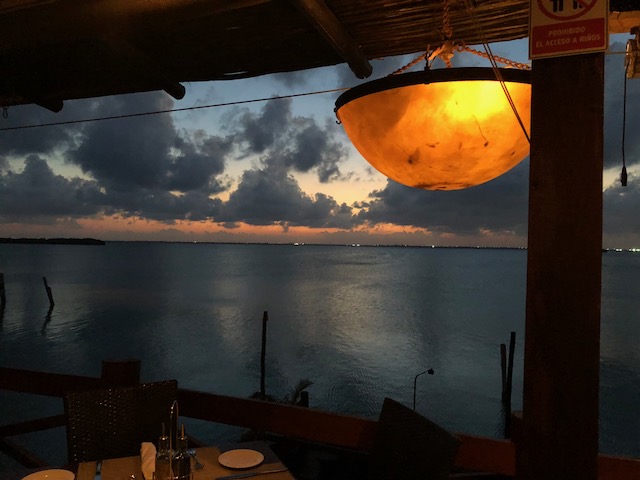 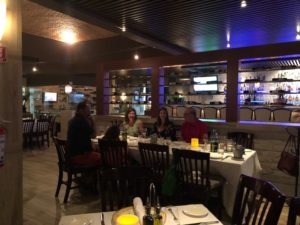 Although the state department has issued some warnings about various Mexican tourist destinations, we’ve been going to Cancun for the last quarter century. First, we stayed at Fiesta Americana Condessa for two years. Our daughter was 5, our son twenty-four or so. We next rented the Royal Mayan for two years and our daughter  took a friend with her and they played Barbies. 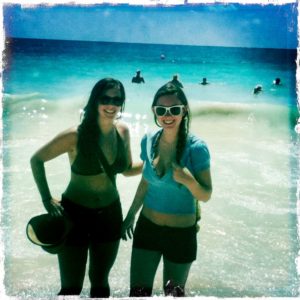 The daughter and friend in Cancun.

After the two years at the Royal Mayan, a sales representative from the Royal Resorts talked us out of buying one of the Royal Mayan time share units, pointing out that it would go back to the state in 2015, which it has done. The Royal Caribbean, which also had 30 years, would go back sooner than their newest property, the Royal Islander, where we came to rest on the top floor in what they call the Penthouse.

The Royal Islander opened in 1993. We were not in on “the ground floor,” but quite  soon after it opened, because it had no trees at all at the time. Since Stacey would have been 5 in  1992, it was probably about 1996 that we bought into the Islander. 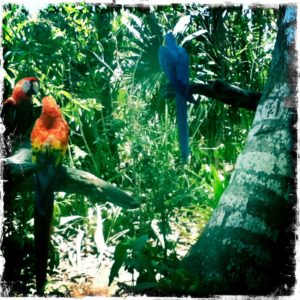 Some 4 years later the Royal Sands construction began on a site next door to Kukulcaan Plaza that had previously housed the Royal Palace. Pre-construction prices were cheaper and we liked our one week so much that we ended up purchasing Week #14 to go with Week #15 that we already owned.

Now, we come with various and assorted family members, since my husband’s sister and her husband bought a unit after we invited the entire family to come down one year and visit us. Apparently, the lure of Cancun with its gorgeous beaches was too much to resist. 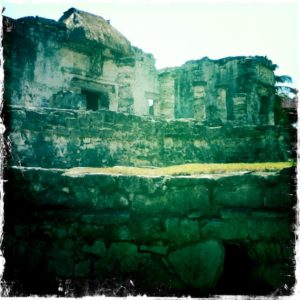 We are right next to the police station here in Cancun (on the other side of Kukulcaan Plaza), but the latest alerts about 14 murders in Cancun center on a drug king-pin who was once a police officer and is trying to corral the drug trade in Cancun and Playa del Carmen. The violence was aimed at opposing gangs, but it is distressing, nonetheless, to think of this beautiful place being ruined for tourists and locals by the unfettered violence, which peaked on April 4th and 5th. (Most of the violence took place downtown). 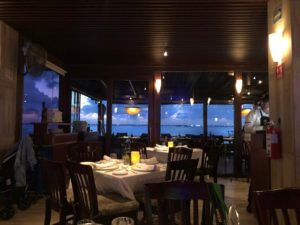 We are entering our second week here and we won’t be trekking off to any downtown locations because of the violence, but it seems to be “business as usual” at the Royal properties. 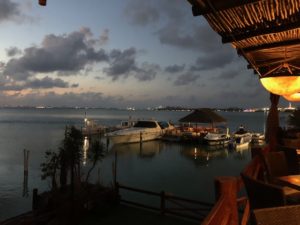