When I heard that tough guy Jimmy Caan—the actor who moved into the Playboy Mansion for a while during a divorce—was dead, I immediately thought of the loss just days ago of another such film stalwart, Ray Liotta. Both were the kind of actors who brought believability to their roles and were much in demand, although, in Caan’s case, he seemed to have a way of shooting himself in the foot by not accepting Oscar-making roles.

There were at least 3 Richard Dreyfuss roles that Jimmy Caan turned down: “Close Encounters of the Third Kind,” “The Good-Bye Girl,” and “What About Bob?” In two of those instances, the lead was in the running for an Oscar. (Caan was nominated only as Best Supporting Actor for his portrayal of Sonny Corleone in 1972’s “The Godfather.”)

James Caan was often honored by Italian/American groups and commented that he wasn’t even Italian (he was Jewish and his father was a Queens butcher), but that they wouldn’t allow him to turn down the honors. Caan also played football at Michigan State in his youth and attended (but did not graduate from) Hofstra or MSU. 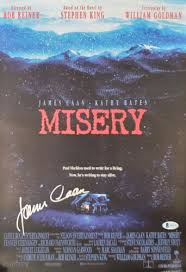 Caan  turned down the lead role in “Kramer vs. Kramer” (Dustin Hoffman) and “One Flew Over the Cuckoo’s Nest,” a film which swept the Oscars and earned Jack Nicholson an Oscar. When the part was offered to Caan, he said something derogatory about a film that would take place largely within the walls of a mental institution, but he learned his lesson from turning down that Oscar part, later accepting the lead role in 1990’s “Misery,” which was directed by his good friend Rob Reiner.

In various articles James Caan holds out that last role as an offering from Reiner to help Caan out of a deep depression, precipitated by the death of his sister from leukemia at only 38 (she was working for Caan at the time). Caan talked openly about his battle with depression. He also battled a cocaine addiction for a while and, while considered for both the role of Travis Bickle in “Taxi Driver”(1976) and Axel Foley in “Beverley Hills Cop” (1984), there were times when getting him insured was a crap shoot, much like the situation with Robert Downey, Jr., during Downey’s bad years flirting with drug disaster.

Slated to play Michael Corleone in “The Godfather” first, Sonny was the part that cemented James Caan in the public’s consciousness as the hot-headed Italian brother of Michael who dies a grisly death during a toll booth assassination. Once considered for Gene Hackman’s role in “The French Connection” (1971), for Stallone’s role in “Rocky” (1976) and for Ryan O’Neal’s role in 1970’s “Love Story,” James Caan’s 137 credits included a lot of major missed opportunities. One story said that, when offered a role in “Apocalypse Now,” his agent said Jimmy would read it only if guaranteed $1 million. The small role went to Harrison Ford. And then there was the point when Caan discovered, to his dismay, that his money was gone and he was flat broke.

Moving past that set-back, James Caan would end life valued at $20 million, having started out with a $35,000 salary for his storied role in “The Godfather” (1972). He reprised his role, uncredited, in the 1974 “The Godfather II” for the same amount. In 2013, the rough-and-tough James Caan earned $75,000 for a role, an amount which did not appropriately reflect his impact on American cinema.

It seemed incongruous, to me, that, when he died, one obituary mainly mentioned Caan’s role in “Elf” opposite Will Ferrell. That role did earn him $140,000 in residuals but it was far from his most memorable or his best work.

For 9 years this Jewish cowboy from Queens rode on the rodeo circuit, with a clause that allowed him to pass if he was shooting a movie. He once described massive numbers of screws (14 in one spot) and other medical measures, the result of doing many of his own stunts and his own daredevil attitude.

It was this attitude that his many friends commented upon, including his great sense of humor. Along with comments that he was seen being pushed in a wheelchair by one of his sons in 2021 and using a walker when out to dinner in the last year, came the remarks about his appearance at “The Godfather” 50th anniversary celebration. Time, the critics said, had not been kind to Jimmy Caan.

Still, for me, I remember the four-times married James Caan as the very definition of “a man’s man.” His appearance as Brian Piccolo in television’s “Brian’s Song” (1972), or his 1975 appearance in “Rollerball” and “Misery” in 1990 were epic. Less epic was the song-and-dance-man role opposite Bette Midler in “For the Boys” (1991) or his role as Mr. Henry in the indie film “Bottle Rocket” (1996) or as Frank Vitale in “Mickey Blue Eyes” (1999), that last role playing off his role as a Mob guy.

Jimmy Caan was “in” to women and karate and was married four times, producing 5 children. Most of his marriages did not last long, with 5 years being the norm for two of them, but the marriage to Sheila Ryan that produced acting son Scott Caan (“Hawaii Five-Oh”) lasted only from January 12, 1976 to December 7, 1976, which is not even one year. His final marriage commenced in 1995, but was failing and a divorce was in the works when Caan died on July 6th, 2022.

I will not remember Jimmy Caan as the Dad from “Elf.” I will have many much more intense memories of much more memorable films that he gave us during his 137 outings. Thank you for those many memorable films, James Caan.