Last Day at Sea and Last Day of August 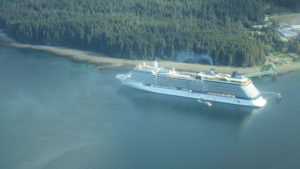 It’s our last day at sea and it is foggy. It was too foggy to see much earlier in the day, but, as we near Vancouver, it is becoming less so.

I went up to the 14th floor to play trivia. (General Knowledge) I was seated near a woman from Australia who was complaining about the cost of the drink package onboard. If you are wise, you’ll invest in a drink package, but whether you plan to drink alcoholic beverages or just soft drinks makes a difference. 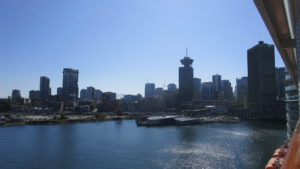 We have a drink package that will allow most wines and pop, but last night, when I ordered a Bailey’s on the Rocks, there was a $1 upcharge. I normally am simply picking up cans of Diet Coke to take to our room for the small refrigerator, but the small refrigerator gave up the ghost and began leaking about 3 days ago, so no way to keep it cold.

I asked the woman about her gripe regarding the drink package she had selected and she said she didn’t drink enough to make it worth while. I said, “Well, you could just get the one for soft drinks.” Her answer: “I don’t drink pop.” O…..K…. So, according to this Australian native, she will not be cruising again. (This was her first). Hmmmmm. Why buy a drink package at all if you don’t plan to drink ANY soft drinks and barely drink alcoholic beverages? The dining room provides lemonade and iced tea and other such beverages with the meals. You do need to budget at least $175 for having up to 2 devices allowed to use the Internet. 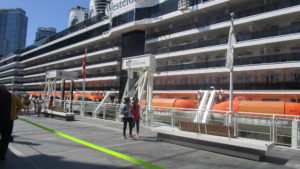 There are a ton of Asian children onboard. We think they are mainly from Canada, which doesn’t start school until after Labor Day. There are special “Asian food” parts in the dining room for lunch.

Last night we were served lobster tail or Beef Wellington and a choice of appetizers (I had a Caesar salad; Craig has been having mainly shrimp cocktail). There has also been onion soup and other delectables, with a dessert menu featuring baked Alaska, tiramisu, ice creams, berry crumbles, etc. 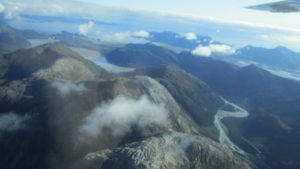 Alaska from the air.

We were sent a bottle of wine to our cabin, but the refrigerator has not been cooperating on keeping it cold. We’re packed and we leave early tomorrow.

In Humor and Weird Wilson-isms, travel

Two incredible airline stories were reported, one by Abha Malpani on May 14th, when she reported on four adults, rushing to board an Air Canada flight from Vancouver to Winnipeg, who accidentally left their 2-year-old behind in the airport. The quartet (quintet, if the baby is counted) had only 10 minutes to make the plane and each adult thought one of the other adults had the child. Air Canada saved the day by figuring out who the child was, where the parents had gone, and putting the baby on the next flight to Winnipeg.

Then there’s the story reported by Grant Martin on May 20th regarding a Pinnacle Airlines pilot, Jeffrey Paul Bradford, who was out for the evening partying hearty with one of the flight attendants, Adrianna Grace Conner, near Harrisburg, Pennsylvania, when the pair, both 24, decided to “go do it in the woods,” according to Lower Swatara Township Police Sergeant Richard Brandt. Somehow, the pair became separated.

The flight attendant found a fireman’s vehicle parked in his home driveway and made enough noise getting in it to rouse the owner, who inquired about why a nude woman was in his firetruck. Adrianna was later charged with theft from a motor vehicle (she took a flashlight) and public drunkenness.

The pilot, clad only in flip-flops and a wristwatch, who was found hiding behind a shed, was not quite as lucky. Although he did make contact with another woman and asked her to bring him a pair of shorts, she called 911, instead, which brought a helicopter and authorities (rather than the pair of shorts the drunk  naked pilot had requested) and charged him with all the things you would think he would be charged with: public drunkenness, indecent exposure, public lewdness, etc., etc. etc.

Pinnacle Airlines is owned by Northwest Airlines, which also owns Compass Airlines. Just last month, a Compass Airlines pilot set fire to his plane rather than fly a route he didn’t want to fly.

So, in other words, it’s just another day in the friendly skies.