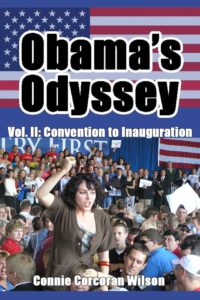 Taken during a McCain rally at the Cedar Rapids Municipal Airport during the 2008 presidential campaign. Cover of Volume II of “Obama’s Odyssey: The 2008 Race for the White House.” (Available on Amazon in paperback and e-book).

My second podcast was an interview with Texas author Michael Serrapica, author of “Conned Conservatives and Led-On Liberals.” We talked about the various propaganda techniques that abound in politics.

Michael has agreed to join me at 7 p.m. (CDT) on Thursday, March 26th, to talk more about politics, in general, and about my two political books, “Obama’s Odyssey: The 2008 Race for the White House,” Vols. I & II and his book.

We will probably wander off-topic and discuss All Things Political. Remember, you can call in as the program is “Live” on the Bold Brave Media Global Network (Channel 100), Weekly Wilson.

What You Might Stream or Screen While Maintaining Social Isolation