The second year of the Windy City Film Festival kicked off on July 12th at the Victory Garden Biograph Theater in Chicago. This is the very same theater made famous by John Dillinger’s assassination outside it after viewing “Manhattan Melody” in the 1930s. 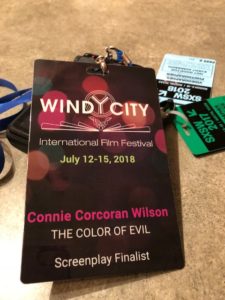 As a Finalist in the Screenplay Category, I was fortunate enough to be able both to see the interior of the remodeled theater at 2433 Lincoln Avenue in Chicago, a feature length film (“Double Major”) and a series of 8 short films.

We were all warmly welcomed and the choice of hors d’oeuvres was the best and most innovative of any festival I’ve attended as a critic (and I’ve attended a few). Plates of candies  are what they serve at the Oscar gala were arrayed, along with grapes, and the bar offered a discount to those of us who were Festival Finalists. Still, with a glass of wine reasonably priced at $7 that 20% discount wasn’t totally necessary. Bravo to the organizers!

After the opportunity to chat with fellow contestants, I was fortunate enough to chat at length with an actress in one of the selected films,  Jen Buhrow, and, later, had conversations with other contestants, including 2 directors of the shorts that we watched for 2 hours, Thom McCloud and Brad Riddell. All of the films were shot in Chicago. 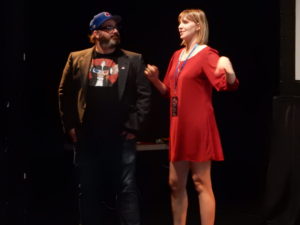 First, let me compliment the film festival organizers, Mindy Fay Parks and Josh Hope, on the truly great opening credit sequence that introduced several short films. They were as good (or better) than those shown at the opening of the much-larger (and 25 times older) Chicago International Film Festival.

This was a riveting short piece featuring Clare Cooney and Shane Simmons. Clare is a runner and, while jogging down an alley in a suburb that had alleys that resembled those in Bridgeport, where my son lived for years, she is an eye witness to a murder. The murder appears to have been an accident caused by an argument between a young couple, when the young man shoves the girl and she falls and hits her head. Still, when the murderer then begins chasing Clare, everyone senses the danger she is in, and when the murderer later turns up at a gathering at a local bar and follows her home, the stress level goes even higher. This one was terrific! Clare Cooney not only acted in it, she directed it. Watch for her in the future. 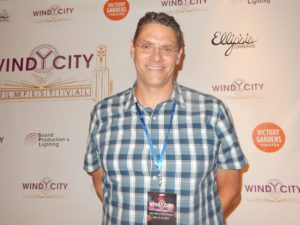 This was my second favorite of the night. I told Director Brad Riddell that I could relate to it more easily, because, based on a roughly autobiographical brain injury he incurred, it leaves the viewer thinking about his (or her) own mortality and was not aimed exclusively at a young audience. Another huge plus for this film was its star, a local Chicago actor who looks as though he could be Adrien Brody’s brother (if Adrien Brody had a brother, which he does not). The actor’s name was David Tasques and it opens with Tasques playing the piano (which also summoned memories of Adrien Brody’s 2003 Oscar win at age 29 for “The Pianist.”) Puzzled by the water dripping through his ceiling from the floor above and the apartment of the old lady who usually bangs on the floor with her cane when the concert pianist is practicing (causing him to yell “Ten Minutes More”), Tasques’ attempts to find out what is going on leads to a surprising discovery. Director Brad Riddell has written 4 feature films and is currently working on a feature film for a Hollywood studio, as well as on a podcast. He is both a faculty member at DePaul and a working screenwriter.

A chubby little girl is watching the film “Danse pour la luna”  that predates cinema as we know it, going all the way back to the Lumiere days and the Man in the Moon. We then see the girl being bullied at school by two young classmates and a lesson about true friendship is learned. Trevor Morgan, who made the film, circled back to the Man in the Moon  film for a sweet ending.

This one was light-hearted, as we follow the adventures of  a young man named Rupert Madursky who refuses to let NASA’s demise stop him from wanting to become an astronaut. As one character reminisces, “Becoming an astronaut was pure and American. We all wanted to grow up to be President or an astronaut.” Christopher Olva wrote, produced and edited this gem, with lighting and lenses by DePaul University. I think one reason I related to it as well as I did is that my husband and I toured Cape Canaveral when they were dismantling one of the towers and having the last NASA manned flight and it was a bittersweet thing to think of this nation’s space program being mothballed. (It still is). The film also had the advantage of being humorous in spots, as when Rupert ticks off a Russian cabdriver by saying to him (in Russian), “Cosmonaut is for second place,” when the driver asks if he is training to become a cosmonaut. (Rupert is fond of wearing NASA gear at all times.) The driver unceremoniously dumps his fare in the street. 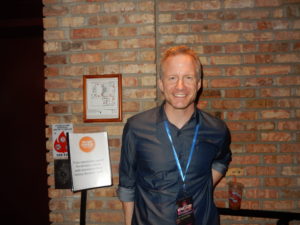 Written and directed by Thom McCloud, who is primarily a local Chicago actor, a stressed man in a car is shown sitting near a railroad track and practicing the “Hello, I’m _____” speech that normally means the individual is going to be attending an AA meeting.  As the film opened, the car’s positioning near the railroad tracks immediately made you wonder if the driver intended to join a meeting (he has said his wife will leave him if he doesn’t attend) or if he is suicidal enough to drive that car onto the tracks. Speaking with McCloud later, he shared that the film is autobiographical and that it was shot in one day. Asked about the difficulties of making it, he singled out Pre-production, saying that raising the money to fund it was largely done through crowd funding and by him pitching in his own funds.  It was a thought-provoking piece.

The director of “Cheese Shop”

The director of “Cheese Shop” shared, from the stage after the viewing, that Director Sammy Zeisel also had experience at working in a cheese shop, and learned how difficult things that are seemingly simple can be. The out-of-work actress who takes the job in the cheese shop learns that everything from wrapping wedges of cheese to mopping floors can be difficult. Cheese Shop is a bitter-sweet, funky little film…like a simple wedge of cheese, says the write-up, and it is.

This film was also an autobiographical story of the marriage of a black G.I. suffering from PTSD and his Korean bride. Two young children are in the middle of their parents strife and are ultimately left with their black grandmother, Pearl.  Christine Swanson, its director, cast the film well and the actors all deliver. The reason it was slightly less appealing for me was difficulty with understanding the Korean battered wife. The film almost needed subtitles for some of her dialogue. I winced when the black grandmother served watermelon to her Asian/American grandchildren on a visit that turns into a permanent placement. Not sure that plays well in the P.C. world of today, but this was obviously an earnest effort and it was well done. The child actors were outstanding and the picture of the real Pearl with her granddaughter at the film’s finale was priceless. 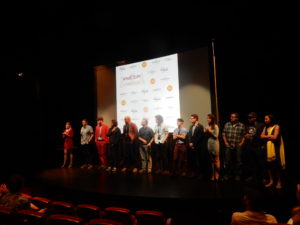 Mickey’s Pets star is fourth from the right.

Ashley S. Brandon made this short documentary about Mickey’s pets, and the real Mickey, multiple tattoos covered by a lovely green dress, was present onstage following the film. She is shown with her pts, saying, “I’m never lonely and they never judge me.” Mickey is working on stuffing a peacock to enter in the 45th Annual National Taxidermy Competition in Seven Springs, Pennsylvania. The winner of the title Taxidermist of the Year will take home a $1500 prize. Mickey Alice Kioapte certainly stood out in the room full of exclusively male animal stuffers (if that is a term). Side bar: I had a boyfriend in college (Frank Cornwell) who used to be in to taxidermy, and, of course, we all know that Norman Bates was. Of course, Frank also used to work for the phone company and randomly climb a telephone pole outside my  apartment window to phone me, so THAT was odd, too, and so is this nice little film.

The plot here is that, when a young man’s wife leaves town for a few days, he is lonely and so creates talking creatures, made from pillow cases and socks to keep himself company. The first problem was that the sound and the lip movements were “off,” (which I was later told was because the film was being “streamed” from a computer.  The second problem, for me, is the current insistence that all marriages onscreen must be inter-racial. If that isn’t true, then there has to be a LGBQT character or somebody has to be handicapped. [This is based on recent reviewing at SXSW and not on these shorts, but it’s getting to be a bit much.] I’m sure many of the viewers were really intrigued by the concept, but, plot-wise, I was not. I do understand that creating them onscreen must have been quite an accomplishment, but the idea that this grown man was so lonesome for his wife because she left for 2 days that he resurrected characters (from his youth?) who he said had been hiding in the attic just didn’t work for me. It sounded incredibly juvenile, since he is depicted as an adult, not a college student.

Still, impressive work from all. Go Chicago! It is an honor to have a screenplay being considered amongst the 24 others (25 total) and I have no illusions of grandeur for what is only my second solo outing in screenplay writing.