World Premiere of Showtime’s “I’m Dying Up Here!” at SXSW 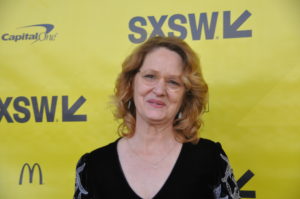 Melissa Leo as Goldie in “I’m Dying Up Here!”

The cast of “I’m Dying Up Here” came to SXSW to answer questions about the much-anticipated Showtime drama series that is loosely based on Mitzi Shore’s The Comedy Store in Los Angeles. A book by William Knoedelseder was the basis for the superlative writing from head writer Dave Flebotte. The pilot episode was directed by Jonathan Levine (“Warm Bodies,” “50/50”) and will premiere on the network on Sunday, June 4th, 2017.

With Jim Carrey as one of the Executive Producers of the serious treatment of being funny, the series delves into the inspired, damaged and complicated psyches of those who stand alone in front of an audience “dying” for fame, fortune, and, with luck, a shot at Johnny Carson’s “Tonight” show. (Carson is portrayed by actor Dylan Baker, who appeared as Colin Sweeney in “The Good Wife” episodes). 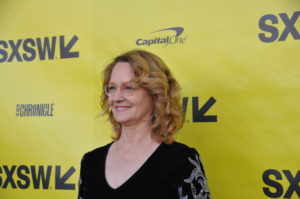 The fictional group is competitive and close-knit and they are mentored by “Goldie” (Melissa Leo), a brassy comedy club owner who rules over her business with an iron fist, but also nurtures the comedians with tough love, telling them when they are “ready” for a shot at Carson. Melissa Leo refrained from mentioning Mitzi Shore in the Q&A following the showing of the pilot, saying, “I play Goldie and I have a good time with her and I just try to keep up with her.” She added that she had “gotten a call a handful of weeks before they went in” and that the part might be considered an homage to the well-known Ms. Shore, but that she, personally, was just portraying the character as scripted and would not give the name of a real person that the character might be modeled upon. 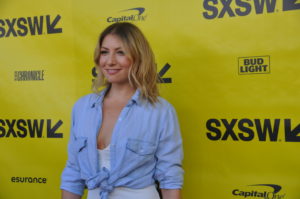 The other prominent female character in the line-up of primarily male comics is played by actress Ari Graynor as Cassie Fedder, a Jewish girl from Wink, Texas. Graynor shared that she had not been a stand-up comic prior to being cast as Cassie, but all agreed that, in the writing of this drama series, “These are tortured f****** souls. It’s Johnny or nothing.” Her boyfriend (and fellow comic) of the moment onscreen, Sebastian Stan, tells her that, in comedy, “It’s the climb. It’s all about the climb.” 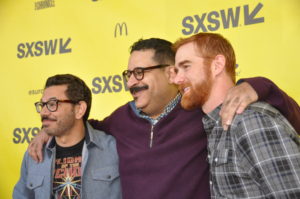 Al Madrigal as Eddie, Erik Griffin as Ralph, and Andrew Santino as Bill in “I’m Dying Up Here!”

The other principal actors in the drama, who portray fellow struggling comics, are Michael Angarano as Eddie, Clark Duke as Ron, Andrew Santino as Bill, Erik Griffin as Ralph, and Al Madrigal as Edgar. All visited Austin, along with Executive Producer Michael Aguilar, to talk shop and comedy. (Jim Carrey did not attend). Other “name” stars who have small parts in the pilot are Alfred Molina, and Robert Forster and Cathy Moriarty as the parents of one of the promising comics at the club who dies unexpectedly. (Forster was in two SXSW films playing a similar small role, the other being the Grandfather of a murdered hooker in “Small Town Crime.”)

The time frame for the series is the seventies, so the costuming, complete with bell bottoms and paisley shirts adds flavor. Someone in the cast compared it to the now-canceled “Vinyl” with laughs.

The music is good (“You Know It Don’t Come Easy” was used at one point) and the cinematography (D.P. Remseng) was right on target. But it is the writing by head writer Dave Flebotte (not present at SXSW), who lived the life, that sets this series head and shoulders above the rest. With lines like, “You look like Flip Wilson went to Sears” (spoken to an African American comic in a suit) and other zingers, that he and the 8 or so writers that Executive Producer Michael Aguilar said contribute in the Writers’ Room, zero in on a topic that allows them to be both funny and serious. 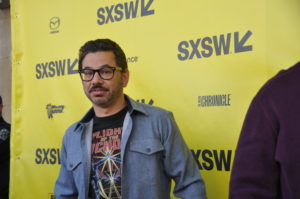 Al Madrigal is Edgar in “I’m Dying Up Here!”

The cast, during the Q&A, also was funny while being serious, scoring comedy points while being questioned. Stand-up comic Al Madrigal (Edgar) who was contacted for his part, kept interjecting, “Again, I didn’t have to do that” as others, like Andrew Santino (Bill) who plays “a bit of a prick” explained how they had auditioned up to four times for their role. (Andrew Santino did say that, as the series goes on, “I get less dick-y. I’m less of a mean, cruel, sardonic asshole.”) 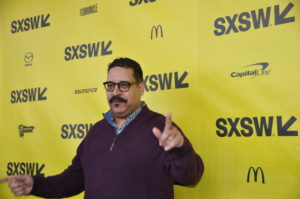 Erik Griffin, who plays Ralph, said he had been doing his act at an L.A. comedy club when someone said to him, “Hey, Jim Carrey’s here.” Said Griffin, “Next day I got an audition for the part.” Griffin drew laughs by saying he could be “racially ambiguous.” 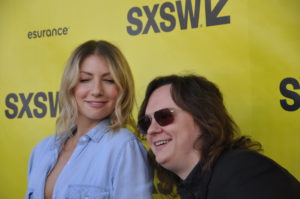 Sebastian Stan makes an appearance in the pilot, but his continuation in the series is in question. It was mentioned that Stan resembles a real-life comic (Mitch Hendricks) with a similar story line as that in the pilot, and that Dave Flebotte had worked with a waiter who told him the back story of the lone African American upstart comic portrayed, who takes a job working in a church while trying to make it as a struggling comic. Executive Producer Michael Aguilar said of head writer Flebotte, “In 20 years, I’ve never worked with a better writer.” Flebotte has previously worked on “Ellen,” “Bernie Mac,” “Empire,” and “Masters & Johnson.” 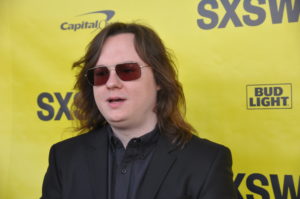 One recognizable face in the crowd of comics was Clark Duke, who showed up with the same hair style (long) that he wears on the show. The 32-year-old Duke is a longtime good friend of Michael Cera. In college, the two wrote, directed and starred in a web series called “Michael and Clark.” Duke has starred in both “Hot Tub Time Machine”and “Kick Ass” movies, and was given a role on “SuperBad” as a result of being onset so often to hang with good friend Cera. The Glenwood, Arkansas native also appeared in episodes of “Greek,” “Two and a Half Men,” and “Robot Chicken.”

“Nobody Speak: Trials of the Free Press” @ SXSW